A Slovak Justice Secretary and judge allegedly accepted a bribe from an organized crime group to extort the owners of a bar establishment in Western Slovakia, the Slovak Spectator reported Tuesday. 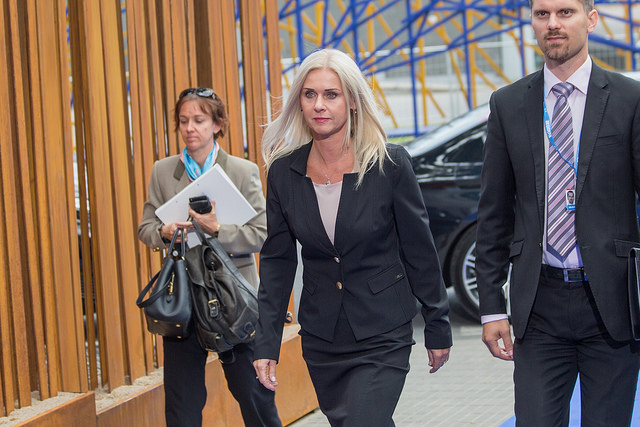 Monika Jankovska, State Secretary, Ministry of Justice, Slovakia (Source: Arno Mikkor, Aron Urb, CC BY 2.0)The Justice Ministry's State Secretary Monika Jankovska allegedly accepted a bribe of three million Slovak crowns-the currency at the time- equivalent to US$124,000 to keep the owners of the restaurant in detention while the Sycora clan harrassed the wife of one of the owners into transferring the deed.

Jankovska was nominated for the post by the ruling Smer party--the party of resigned Prime Minister Robert Fico.

The former owners of the Fatima bar and restaurant under the landmark Trencin Castle, Ondrej Janicek and Jozef Strelcik, claim that the Sykora clan linked to the late mafia boss Peter Congrady extorted them out of rightful ownership with the help of Jankovska.

Shortly after Janicek acquired the bar in 2000, it was raided by police who assaulted him and his business partner. Both were detained, charged with extortion and kept 15 months in custody until Jankovska handed down a sentence for the time spent in detention, after which they were both released.

While they were detained, the Sykora clan harassed Janicek’s wife until she agreed to transfer the bar to them.

The Trencin District Court ruled that the transaction was invalid.

Former Sykora gang member, Michal Vida, has confirmed the bribery claims stating he was present at the meeting when Jankovska agreed to the bribe. Vida also produced a notary record that mentioned a transfer of one million Slovak crowns for "for O.J., J.S., R.Z.” - the initials of Janicek, Strelcik, and a third man also charged for extortion. Jankovska’s name does not appear on the notary statement.

Jankovska, who has refused to step down from her post as State Secretary of the Ministry of Justice, also claims she has never heard of the document and refutes the accusations.

The new Justice Minister, Gabor Gal of Most-Hid, requested a meeting and explanation from Jankovska.

This case is the most recent development in a series of scandals in Slovakia following the exposure of alleged ties between the Slovak government and organized crime groups. The death of journalist Jan Kuciak in February sparked a series of protests when his final investigation was published detailing connections between the highest ranks of the Smer party government and the notorious Italian ‘Ndrangheta mafia.