Protesters in Guatemala demanding the resignation of President Jimmy Morales and over half of the Congress over alleged corruption have been met with violent repression by military, state, and private police, including heavily armed riot unit, Kaibiles, reports Telesur. 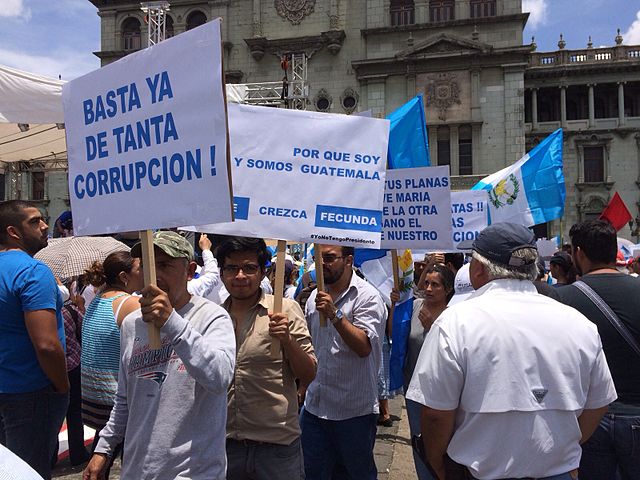 Protestors in August 2015 (Photo: Nerdoguate CC BY-SA 4.0)One protester, Antonio Cruz Jimenez, was killed on Monday when a car ran into a crowd on a blocked highway in Jutiapa province, according to the Latin American Herald Tribune. The Red Cross also reported that eight injured people received treatment from them.

Protests have been ongoing around the country since September 2017, when Congress passed multiple decrees providing Morales immunity from the corruption investigation by the United Nations International Commission Against Impunity in Guatemala (CICIG).

The repression of protesters, who are mostly students, union leaders, indigenous rights groups, campesinos (farmers), and women’s groups, intensified on Sunday as Morales was presenting the government’s second report outside of Congress, despite the Ombudsman, Jordan Rodas’ urges that authorities treat protesters with respect.

Morales is under investigation for unaccounted campaign expenditures totaling US$825,000 during the 2015 election, as well as bonuses he received from the Guatemalan defense minister totaling upwards of $60,000.

Protesters are demanding his resignation, as well as that of ministers implicated in corruption scandals, while other protesters in rural states are also demanding the nationalization of electric power.

The Citizen’s Assembly Against Corruption and Impunity in Guatemala found that 112 out of 158 members of Congress were part of a “corruption pact,” that allowed politicians immunity from prosecution. Several ministers, including Morales’ brother and son have either resigned or been arrested on corruption charges.