Czech President Milos Zeman proudly got his piece in the Donald Trump popularized “war on the media” by waving a toy assault rifle inscribed with the Czech for “at journalists” at a news conference, reported The Washington Post. 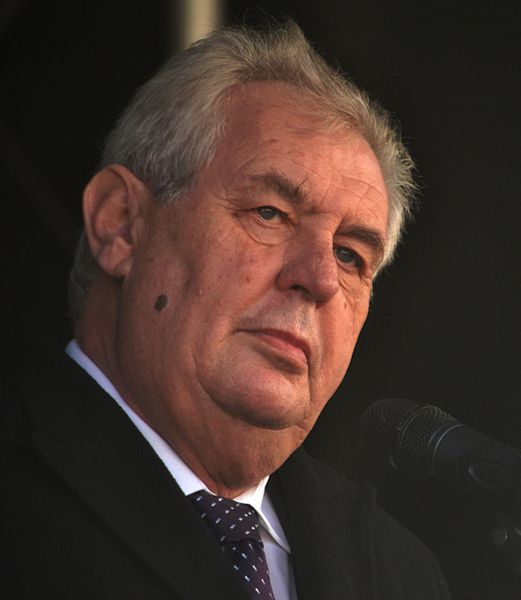 Milos Zeman (Photo: David Sedlecký, CC-BY-SA-4.0)The press conference was well timed on Czech Republic’s election day Friday, which ended favorably for the next expected prime minister and ally of Zeman, Andrej Babis, but Zeman instead took the opportunity to show off his new toy. The wooden AK-47 was a gift from a trip to western Czech Republic, and adorned with a bottle of Czech liquor in place of the ammunition clip.

For President Zeman, this was not his first assault on the media. “In 2002, Zeman — who was at the time prime minister— compared the media to a ‘septic tank.’ ‘The Czech journalist is currently the dumbest creature on Earth,’ he was quoted as saying,” according to The Washington Post.

Nonetheless, Czech Republic currently fairs well in established free press indexes, such as Freedom House and Reporter’s Without Borders’ rankings. The biggest attacks on the media are historically empty rhetoric.

President Zeman does not have the ability in his current position to change legislation against the media. Additionally, his alliance with populist billionaire Andrej Babis could also be either a hindrance or assistance, as Babis owns two of the country’s chief media outlets. In fact, Babis capitalized on his media endeavors and became the second-richest man in the Czech Republic, seemingly at the expense of independent media.

Zeman’s flaunting of the mock rifle “is outrageous as it is only a week after Maltese journalist Daphne Caruana Galizia was brutally murdered…in 2017, 42 journalists were already killed for doing their job,” Czech investigative journalist Pavla Holcova told OCCRP.

Certainly, Zeman’s action struck a chord across Europe: human rights groups immediately condemned the deed, especially in light of Caruana Galizia’s death—a tragedy which even led the European Commission to release a statement of disgust and condolences.