Responding to an investigation into concealing millions of his fortune, the Philippine President accused on Saturday the heads of the Supreme Court and the anti-corruption agency of being corrupt themselves and challenged them to resign with him. 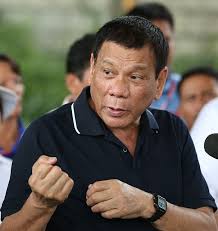 Rodrigo Duterte's accusations came days after the Office of the Ombudsman announced it was investigating Duterte's and his family’s financial dealings carried out when he served as a city mayor.

The probe was sparked by a complaint by Senator Antonio Trillanes who claimed that Duterte had not disclosed in his official assets declaration 2.2 billion pesos (US$ 43.1 million), which he is believed to have received from unknown sources between 2006 and 2015.

Duterte argued back that his family’s wealth comes from legitimate sources and that it amounted to no more than 40 million pesos (US$ 785,000). He said that the money came from the sale of landholdings inherited from his father, a former governor and a Cabinet minister under late President Ferdinand Marcos.

As president, Duterte has immunity from prosecution but can be impeached for serious offenses such as corruption.

However, after initially welcoming the probe into his wealth, Duterte changed his mind and refused to cooperate with investigators, instead accusing their bosses of being corrupt.

He contended that several officials of the Ombudsman, including its chief Conchita Carpio Morales, took bribes from opposition officials to dismiss cases against them.

He also announced he intends to establish an ad-hoc commission to probe the anti-graft body's suspected anomalies and threatened to have the military arrest its members if they refuse to answer to summons this commission would issue.

In addition, Duterte claimed that Chief Justice Maria Lourdes Sereno has not declared over US$ 724,000 she received when she worked as a private lawyer in arbitration proceedings against the Philippine International Air Terminals Co. Inc..

Following these accusations, an impeachment complaint was filed against her and endorsed by the House of Representatives.

On Sunday, Sereno sent to Duterte her reply-affidavit to the impeachment complaint, requesting to be authorized to cross-examine the witnesses who testified against her.

According to newspaper ABS-CBN,the Ombudsman office tweeted a short reply to the President's accusations, saying: "The Ombudsman has already stated its position; to abide by its constitutional duty. No need to add more."

"Sorry, Mr. President but this office shall not be intimidated," Morales said in a statement, newspaper ABS-CBN reported.