The driver for the Kosovo Consulate in New York was among eight people arrested for trafficking arms and drugs and laundering money for Italian and Kosovo criminal groups as well as for Mexican drug cartels, BIRN reported Friday. 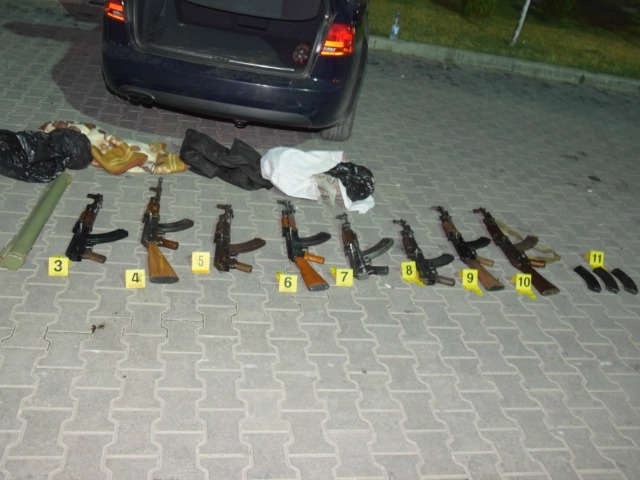 Seized arms (Photo: U.S. Attorneys Office for the Eastern District of New York 640)While working as the chauffeur for Kosovo Consul Teuta Sahatgija, 34-year-old Albert Veliu simultaneously ran international arms and drugs trafficking operations, with ties to La Cosa Nostra mafia and Kosovo criminals in both the US and across Europe, according to court documents.

Veliu was caught after selling an undercover agent 15 AK-47 rifles and a Yugoslav-era anti-tank rocket launcher, the M80 Zolja.

He was told that Mexican cartels required the weaponry for a drugs war near the US border, BIRN reported.

In one wiretapped conversation, Veliu reportedly called the AK-47s "sneakers" and the rocket launcher a "Shaq-sized sneaker" – in reference to 7-foot-1 basketball star Shaquille O’Neal.

After telling the agent he had access to arms, Valiu sourced the weapons on a trip to Kosovo earlier in June before returning to New York on June 21 to finalize the deal.

On June 27, he was arrested in New York along with seven other men. The same day, Kosovo police seized the weaponry and arrested four of his associates in the city of Kline. Searches also led to the seizure of additional weapons, ammunition and over €60,000 (US$ 68,280) in cash.

In another wiretapped conversation, Veliu reportedly boasted that his cousin was Alex Rudaj, the notorious leader of New York City-based Albanian mafia 'the Corporation'.

He also told agents that his father-in-law was "the leader of an Albanaian organized crime faction in the Czech Republic" and was "interested in transporting large amounts of cash to the Czech Republic and other Eastern European countries to be laundered back into the United States," BIRN reported.

Valiu is also accused of laundering US$ 800,000 in drug money through a network of companies with five of the arrested, including his brother Alban.

The scheme began when Christopher Curanovic, who has connections to the Sicilian-American mafia La Cosa Nostra, was seeking to recover an extortionate debt from a former criminal associate.

He, Veliu and a third defendant then devised a money laundering scheme to recoup the owed money. This included forging paperwork to exchange the dirty cash "clean" checks.

Another of the five involved in the scheme was Dilber Kukic, who last year was charged with manslaughter after a scheme to cut corners and boost profits in an East Village property resulted in a gas explosion that killed two people and destroyed three buildings.

In separate charges, Veliu and Curanovic also allegedly brokered the sale of some two and a half kilograms of marijuana.

"This case demonstrates the increasingly global reach of our investigations, and marks the important disruption of a […] network that extended into Europe and involved criminals who were prepared to provide a pipeline of dangerous weapons," said Acting US Attorney Bridget Rohde.