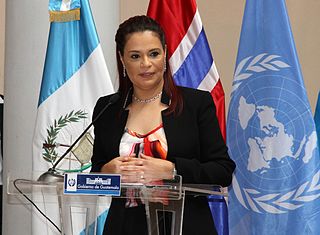 Roxana Baldetti (Photo: US Embassy)Baldetti was indicted in February for cocaine trafficking, but has denied any wrongdoing.

The US extradition request claims that several individuals testified to meetings between Baldetti and members of the Zetas, during which she agreed to receive money from the drug trafficking organization.

An individual referred to as Witness 1 paid Baldetti more than US$ 250,000 between 2011 and 2012 as part of an agreement that she would allow the cartel to move cocaine across Guatemala, according to the document.

Witness 1 also said that Baldetti used her position to help the Zetas remove an individual from a rival Mexican cartel, La Tribuna reported.

The former vice president’s connection to drug traffickers was suspected well before the February 2017 release of the US indictment, especially her ties to Marllory Chacon Rossell, one of the most powerful narcotics traffickers who surrendered to Americans in 2014.

Baldetti is incarcerated in Guatemala for different corruption cases but has not yet faced a drug-related charge from Guatemalan authorities.