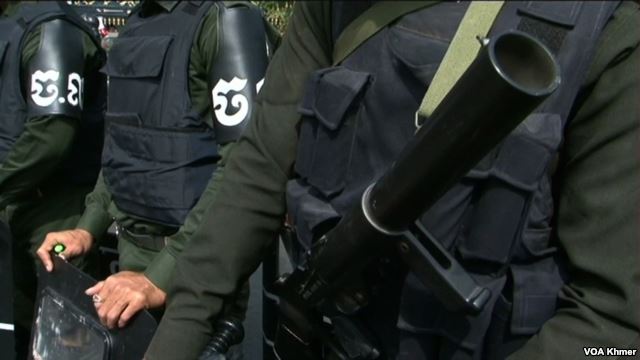 Cambodian police (Photo: VOA)Police confiscated more than 60 kilograms of packaged methamphetamine and heroin during the raids that authorities believe were brought into Cambodia from the Golden Triangle. That spot where Thailand, Laos and Burma meet is the world’s second largest drug-producing hub after Latin America.

The suspects, identified as Loung Sopha and Syla Loy, face 20 years to life in prison and fines of up to US$ 25,000 if convicted.

"The group in this case had been organizing their network for four to five months," Lt. Gen. Mok Chito said. "We cracked down on the Cambodian ringleaders."

Police have uncovered 3,562 drug crimes and arrested 8,022 people including 823 women since an anti-drug campaign started in January, according to Chito.

Unlike Latin America, major cartel figures in this area are rarely captured.