Media freedom watchdog Reporters Without Borders (RSF) has called on Bulgaria to protect Dimitar Stoyanov, a journalist with OCCRP's Bulgarian partner Bivol, after more than a year of threats prompted by his reporting. 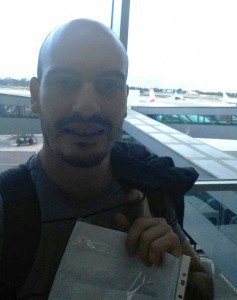 Dimitar Stoyanov (Photo: Bivol) Stoyanov and Bivol have reported extensively on corruption by senior politicians and businessmen in Bulgaria, producing work that has often prompted backlashes.

Stoyanov in particular has been targeted, with unknown perpetrators following him and breaking into his home last year. Stoyanov complained to the police, who have said they have initiated an investigation, but have not provided further details. RSF urged Bulgarian authorities on Friday to provide the journalist with a report on the progress of their inquiries.

According to Bivol, Stoyanov and two of his colleagues were summoned by police to the central Bulgarian town of Troyan on Dec. 13, a week after the they met with a controversial local lawyer, Momchil Mondeshki, who is implicated in the “Yanevagate” influence-peddling case allegedly involving senior politicians and judges.

The Bivol staffers were forced to sign a document pledging to stay away from Mondeshki.

"We offer our full support to Bivol’s staff, who are the victims of an unprecedented campaign of harassment by the oligarchs and officials they have covered, and we request protective measures for Dimitar Stoyanov,” Pauline Ades-Mevel, the head of RSF’s EU-Balkans desk, said in the group's statement.

RSF ranks Bulgaria at 113 out of 180 countries covered in its 2016 World Press Index – the lowest among European Union members.