China: Corruption Fugitive Returns After 13 Years on the Run

China’s most-wanted corruption suspect turned herself in to the police on Wednesday after spending over a decade on-the-run in Europe, Asia and North America. 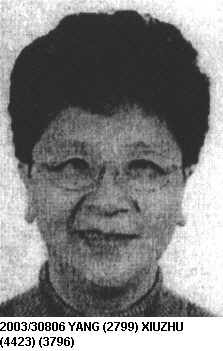 The image used on Yang's Interpol Red Notice (Photo: Interpol)Yang Xiuzhu, 70, stepped off an American Airlines flight at Beijing’s international airport, smiling for the cameras before being taken away in a van by Chinese police to formally sign her arrest warrant. The transfer, shown on Chinese state television, marked the end of a 13-year manhunt, which involved US immigration officials and the highest levels of China’s government.

The former public official is accused of embezzling US$ 39 million in the 1990s, during her tenure in eastern China's city of Wenzhou, the Wall Street Journal reported.

Prosecutors discovered her crimes during a 2003 investigation into a Wenzhou property developer, according to Chinese state media. It was at this time that she fled the country.

Her crimes and departure from China placed Yang on top of a list, issued in 2015, of the country’s 100 most-wanted fugitives for economic crimes. Interpol issued a Red Notice for her arrest the same year.

Yang has been touted as a high-profile target for President Xi Jinping’s crackdown on corruption, which China watchers have said has also been key to Xi’s efforts to consolidate his position as the most powerful Chinese leader in over a generation.

Yang was detained by US authorities in New Jersey in 2014, when she attempted to enter the country on a fake Dutch passport. She was held there while US immigration officials considered her request for political asylum, until her voluntary return on Wednesday.