Israeli police arrested six people on Monday for allegedly trafficking speech and hearing impaired people from Eastern Europe and forcing them to beg on the streets. 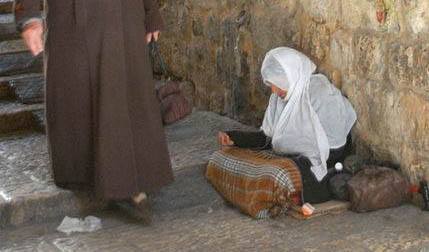 A beggar in Jerusalem (Photo: Udi Steinwell, CC BY 2.5)The six people were arrested in the coastal town of Netanya, north of Tel Aviv, for coercing and blackmailing their victims into work. All six suspects were Israeli, local media reported.

Police rescued ten trafficking victims from an apartment in the city, before transferring them to a shelter.

Police said the traffickers brought their victims to Israel on tourist visas, withheld their passports, and pocketed the vast majority of their earnings. At least one of the trafficked people was alleged to be the victim of sexual assault.

The suspects are being held for crimes including human trafficking, false imprisonment and forced labor.