United Kingdom: One Tonne of Cocaine Seized at Sea

British authorities intercepted a fishing trawler off the southwest coast of England on Thursday, finding more than a tonne of cocaine and arresting three men, the country’s National Crime Agency (NCA) said. 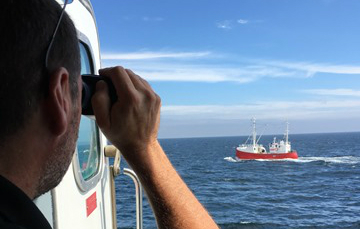 Officers found 50 of bags of cocaine on board worth roughly £80 million (US$ 104.8 million). The NCA estimates between 25 and 30 tonnes of cocaine is imported into the United Kingdom every year.

"A seizure on this scale is likely have a significant disruptive impact right along the supply chain, leaving criminals with large debts to be covered,” Mike Harding, the head of the NCA’s Border Policing Command, was quoted as saying.

“And it will have knock on effects, disrupting further criminality that would have been funded by the profits of this venture."

The three men appeared in court on Saturday to face charges of importing the cocaine and have been remanded until their next hearing on September 20.