The Serbian government has asked the Belgrade airport to forgive local carrier Air Serbia a debt of more than US$ 22 million, according to the Serbian Crime and Corruption Reporting Netork (KRIK). The debt constitutes all payments owed by the carrier to the airport for a one year period meaning the airline essentially used the airport for free for one year. 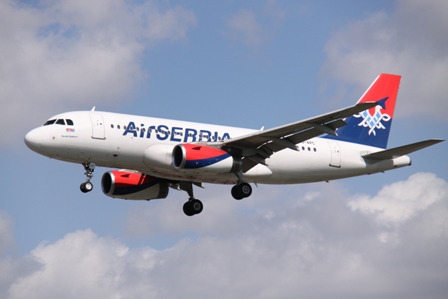 KRIK reports that on December 30 the Serbian government decided to help Air Serbia – which is half-owned by Etihad, a major, wealthy Middle Eastern carrier based in the United Arab Emirates. Air-Serbia owes more than 2,3 Serbian Dinars (US$ 22 million) to the Belgrade airport Nikola Tesla.

The government has an 83 per cent stake in the Nikola Tesla airport.

On January 18, KRIK published a government decision which waives the debt Air Serbia accumulated towards the Nikola Tesla airport between October 1, 2014, and September 18, 2015.

The decision was signed by the government's secretary general Novak Nedic. The space where the signiture of Prime Minister Aleksandar Vucic should be is, however, empty.

On August 1, 2013, the government privatized Serbia's national airline Jat Airways by selling 49 per cent of it's shares to Etihad, and rebranded it Air Serbia. Jat Airways was proceeded by Jugoslovenki Aerotransport (JAT), the national carrier of Yugoslavia formed in 1927, and one of the world's oldest airlines.

However, according to parts of the contract which were published by the Balkan Investigative Reporting Network (BIRN), the Serbian government paid significantly more for it's 51 per cent stake than Etihad did for it's 49 per cent. BIRN reported that, in 2013 only, the government agreed to invest more than US$ 90 million into the company, while Etihad was required to invest US$ 40 million. Apart from this, the government agreed to take over more than US$ 230 million of debt Jat Airways had accumulated. The full details of this contract have never been revealed.

According to KRIK, these negotiations were headed by Sinisa Mali, who was an advisor to Aleksandar Vucic at the time. Mali would later become mayor of Belgrade and the head of Air Serbia's board of directors.

Today, Mali held a press conference following KRIK's revelations. When KRIK journalists asked about what Air Serbia's financial condition would be had the government not decided to forgive the debt, Mali said the company would not even exist.

Mali's comments are very different from his political mentor Prime Minister Aleksandar Vucic. Vucic has said on the record that Air Serbia is a very profitable company. According to Mali, the airline made $4.4 million in 2015. It is not clear if that is with or without the payments to the airport.

The government has announced it will privatize the airport in 2016. At least one economic journalist believes this announcement is related.

"We can conclude that someone is delibirately lowering the value of the airport so that someone could  financially benefit in the sale," said Misa Brkic – a contributor to the local Pescanik news portal.