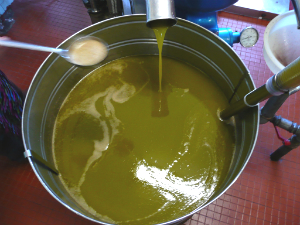 Italian authorities became suspicious when they saw the oil selling despite a poor 2014 harvest.

The counterfeit olive oil seized in December was sold on the markets of Italy, Japan and the United States.

A hundred officers participated in the seizures following an investigation into six suspects involved in commercial fraud and food counterfeiting. They identified a dozen companies in Apulia, a region in southern Italy, and one certification laboratory involved in the scam.

The olive oil had been deodorized with chemicals in a fraud linked to organized crime, reported CBS News’ 60 Minutes.

An investigation of the olive oil counterfeit by 60 Minutes reported that Italy’s ‘Agromafia’ profits from selling a variety of counterfeit foodstuffs—including cheese, wine, milk, bread and butter.

In one case, Italian authorities told 60 Minutes that 42,000 gallons of a cheap wine was being rebranded as a high-end label which would have netted US$ 5 million for the criminals involved.

Italian police seized a total of 59,000 tons of counterfeit food products last year, according to 60 Minutes.

“In certain areas, [the mafia has] really infiltrated the entire food chain from farm to fork,” said Tom Mueller, an investigative reporter who has lived in Italy for 20 years.

He added that as much as 75 to 80 percent of Italian ‘extra virgin’ olive oil sold in the United States was not really extra virgin.

In regards to extra virgin olive oil scam, Mueller said “the profit margin can be three times better than cocaine.”