An Afghan man was shot and killed late Thursday evening on the Bulgarian-Turkish border in the first such deadly incident on a European Union (EU) border since the beginning of the refugee crisis. 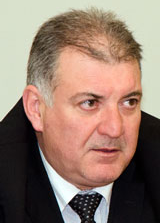 Chief Secretary of the Bulgarian Interior Ministry, Georgi Kostov The incident happened near the town of Sredets on the so-called “green border” (without a border crossing checkpoint) where three Bulgarian border policemen reportedly attempted to stop a group of 50 to 54 young men.

In a briefing early Friday morning, the Chief Secretary of the Bulgarian Interior Ministry, Georgi Kostov, rejected earlier media reports that the men were armed.

He said the migrant was wounded and killed by a bullet that ricocheted after one of the policemen fired a warning shot.

Kostov said thataccording to the policemen, the group behaved aggressively and failed to obey orders to stop and go back, which prompted the warning shot, but an investigation will confirm or reject their account of the incident.

The Interior Ministry Secretary also reported that the group consisted only of men, between the ages of 20 and 30, all appearing fit and in good health.

There were no women and children, as is typical for large groups of refugees seeking asylum in Europe.

The spot where the incident took place is covered by an integrated border monitoring system which intercepted movement and sent a signal to the border authorities.

The wounded man was taken to hospital where he later died.

The rest of the group were detained in the police precinct in Sredets and are to be moved to a nearby refugee reception center.

They have identified themselves as Afghani nationals, but do not have ID documents.

The Prosecutor’s Office in the Black Sea city of Burgas, which is leading the investigation, said the men likely disposed of their documents before being detained.

No Bulgarian citizen has been arrested so far in connection with the incident and there is no information that the case involved the illegal trafficking of refugees, though such cases have been on the rise in Bulgaria in recent months.

According to Kostov, it is very likely that at least one of the men was familiar with the location of the illegal crossing.

Police sources speaking to the Bulgarian dailyDnevnik on the condition of anonymity reportedly said the bullet ricocheted from a bridge under which the group was hiding, possibly while waiting for a human trafficker.

Upon learning of the man’s death, Prime Minister Boyko Borisov left a summit in Brussels at which leaders had met to discuss precisely the refugee crisis, and returned to Bulgaria.

The UN Refugee Agency, UNHCR, said it deplored the death. According to UNHCR, this is the first time an asylum seeker has been shot dead on a European border, though many have died while attempting to reach the EU.