The governor of Russia’s northern Komi region has been charged in Moscow with fraud in a major swoop in which 18 other officials and businessmen are also under suspicion. 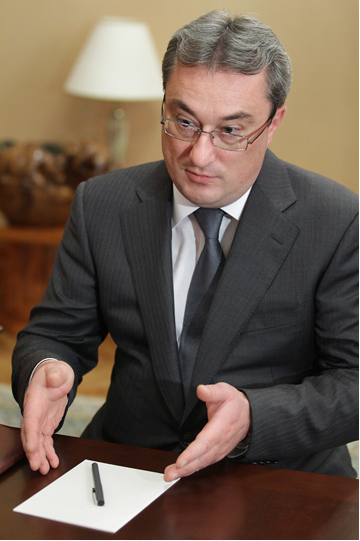 Komi Governor Vyacheslav GayzerVyacheslav Gayzer, 48, and his deputy Alexei Chernov, along with two other senior officials, were detained this weekend over allegations by Russia’s Investigative Committee (IC) that he belonged to a gang running a large-scale illegal enterprise in Russia and beyond.

Spokesman for the IC, Vladimir Markin, said raids on offices and homes linked to the suspects uncovered a haul of more than 60 kilograms of jewelry, 150 watches worth up to US$ 1 million, and 50 seals and corporate stamps.

The IC now seeks to arrest 13 other alleged members of the criminal group, according to Reuters.

Gayzer, who denies wrongdoing, took the top post in the oil-rich Komi region in 2010 during the tenure of former President Dmitry Medvedev.

Gayzer was reelected after scooping a reported78.9 percentof the vote in Russia’s regional polls last week.

The charges against Gayzer follow the arrest of Alexander Khoroshavin, former governor of Russia’s eastern Sakhalin region, in March.

Putin has been informed of the recent developments in Gayzer’s case, according to his press secretary Dmitry Peskov.

Corruption is a major problem in Russia, but the arrest of senior officials is rare.