Where Anti-Corruption Starts at the Playground

They're starting them young in the fight on corruption in Ukraine, where a new playground aims to teach kids to walk the straight and narrow. 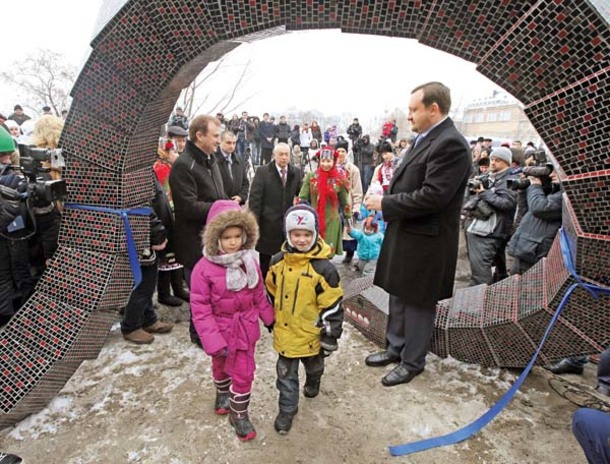 A new addition at Peizazhna Alley, a park in central Kyiv, splits the playground into two halves that are meant to represent the country's "two economies." On one side is the “Land of Prosperity” where citizens pay taxes and the community prospers. Kids can twirl in "giant cherries."

On the other side, in the “Land of Shadows," live a spider and a scorpion, which represent a racketeer and a smuggler, respectively. A sad turtle with a bobbing head also inhabits this dark side, acting as a symbol of the poverty that corruption engenders.

Ukraine was ranked 183 out of 185 countries by the World Bank when it comes to "ease of doing business," which is measured in bureaucratic loopholes and obstacles like officials demanding bribes.

In light of all this, many see the playground as a weak gesture in the face of a profound problem.

It doesn't help that the fountain meant to symbolize "financial flows," which will run underneath the bridge separating the park's good side from its bad, has yet to be installed. Ukraine's central bank had promised to fund the fountain, which was the park's most expensive feature, but has yet to come through, according to the Kyiv Post.

The kids' reactions aren't promising either. "I understand the idea of two worlds, but just can’t choose," said Katya Kuramshina, 12, who smiled as she continued, "I think one can live on both sides at once."