The Network for Affirmation of the NGO Sector (MANS), a Montenegrin non-profit watchdog, claims that there was election fraud in the May 25 local elections.

MANS, which sent more than 500 observers to monitor elections in Podgorica, the capital of Montenegro, said that 842 “irregularities” occurred at more than half of all the polling stations.

The non-governmental organization (NGO) alleges that some of the votes were corrupted: MANS claims that in certain cases mirrors were positioned so vote casting could be seen, thus violating voter secrecy. They also said some polling stations used expired invisible ink to mark voters after they vote, noting that if the ink fails to work, people could vote multiple times in various polling stations.

In addition, MANS reported that some members of their staff were physically pushed and threatened, with one polling commission staff member allegedly telling an observer, “I will cut your head off and throw it out through the window.”

Andjela Nicovic, a MANS observer in Podgorica, said that when she tried to report the questionable invisible ink, members of the voting committee refused to report the incident and “started being very unpleasant and arrogant." 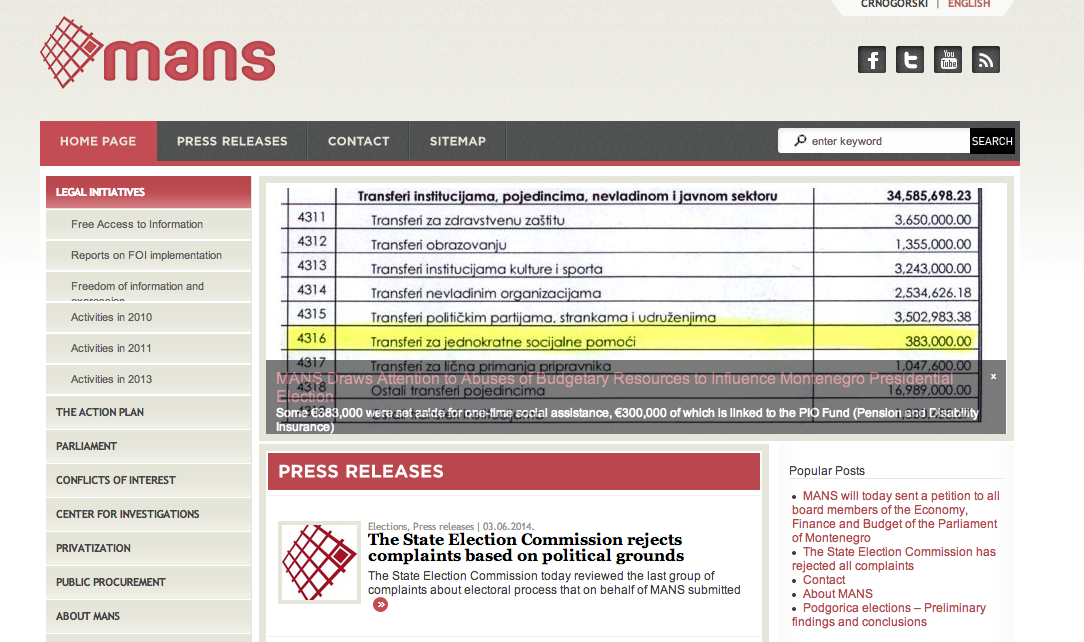 Nicovic also said that a member of the Municipal Election Commission told her, “Sit and shut up, this is not your job” and then pushed her out of the voting room as others yelled at her.

After submitting their complaints to State Election Commission, MANS said in a press release that the complaints were rejected “without any discussion, with the average speed of two complaints per minute.” The organization said it would appeal the rulings to the Constitutional Court.

However, according to Balkan Insight, the acting state prosecutor Veselin Vuckovic said that the allegations were investigated and that any additional claims would be checked thoroughly.

He told the daily newspaper Dan, "Our doors are wide open to all those who have information relevant to this topic. All that has been reported to us, all the information that we have received regarding the vote, every trace, will be thoroughly reviewed. The prosecution has already taken steps.”

Dejan Milovac, a MANS member, said a great deal is at stake with these local elections. He said that if the ruling party, which is Montenegrin Prime Minister Milo Djukanovic’s Democratic Party of Socialists, loses in Podgorica, opposition parties will likely call for extraordinary parliamentary elections.

He said that the final election results will be announced in about two weeks.

Milovac worked with the Organized Crime and Corruption Reporting Project (OCCRP) on the “Unholy Alliances” project, which showed links between a bank controlled by the Djukanovic family and Darko Saric, recently arrested on drug charges in Serbia.

The Montenegrin State Election Commission could not be reached for comment.