A Spanish citizen belonging to Italy's 'Ndrangheta mafia has been arrested and four tons of cocaine seized in Colombia, in the latest illustration of the Italian organized crime group's presence in Latin America.

Hermenegildo Ventura Casan, who was arrested in the Atlantic port city of Cartagena on May 15, reportedly served as a link between the European criminal group and the Medellin-based Oficina de Envigado. According to a press release from the Colombian national police (pdf), he oversaw an international drug trafficking network that used Cartagena as the departure point for a route passing through Panama, Costa Rica, Spain and Italy. 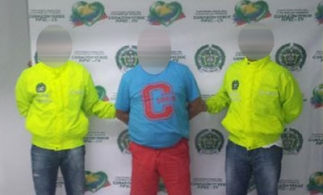 According to the release, the drugs were smuggled in containers with recyclable and industrial raw materials, which were shipped with documentation from false export businesses.

Among Ventura's alleged contacts within the Oficina were the extradited leader of the group, Diego Fernando Murillo, alias "Don Berna," and other key leaders. The 52-year-old Spaniard is also believed to have maintained contacts within Colombia's dominant criminal group, the Urabeños.

Ventura's arrest comes after international police body Interpol issued a "red notice" (international arrest warrant) for the Spaniard, who is also being investigated by authorities in the United States. He is currently being held in capital Bogota, awaiting extradition to Spain. Fourteen other people were captured during the operation.

Italy's 'Ndrangheta, which is thought to control 80 percent of the cocaine entering Italy, has shown signs of a resurgence in Latin America in recent years. As well as being active in Colombia, they reportedly receive cocaine supplies from Mexico's Zetas and are known to have established a trafficking route between Guyana and the United States.

The arrest of Ventura comes only weeks after authorities in the Dominican Republic captured another 'Ndrangheta mobster who was reportedly working on establishing a new drug trafficking route through the Caribbean.

According to international intelligence agencies consulted by InSight Crime, the Spanish city of Barcelona has now become a central negotiating point between Colombian and European mafias, which may explain Casan's Spanish origins and reported integration into the Italian group, despite the importance of blood ties. The use of a non-Italian middleman could also be intended to lower the profile of the 'Ndrangheta's activities in the region.

By Mimi Yagoub. Used with permission of InSight Crime