Justice Minister Dusko Markovic, who also serves as Deputy Prime Minister, is facing charges for allegedly concealing information during the investigation of the murder of journalist Dusko Jovanovic. 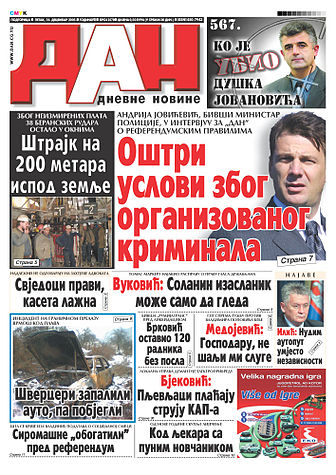 Jovanovic was editor-in-chief and owner of the opposition newspaper Dan, which was often critical of the government. He received multiple death threats for that reason, reports Balkan Insight.

Nikola Markovic, who chairs a government commission examining attacks on journalists, filed charges against the Montenegrin official on Tuesday, after the murder case was reopened by prosecutors last September.

"Before the hearing in 2004, (Dusko) Markovic was warned to tell the truth and not withhold anything ... He was aware that the suppression of important facts regarding the investigation would directly help all the perpetrators and masterminds [of the murder]," Nikola Markovic said.

He also claimed that the Justice Minister, who was the head of the Secret Service during the investigation, had knowledge that the journalist’s life was in danger before he was killed.

Jovanovic was shot on May 28, 2004 after leaving his office. So far, Damir Mandic is the only man who was been convicted of the crime and is currently serving a 19-year jail sentence for being an accomplice to the crime, reports Radio Free Europe.

According to RFE, Dusko Markovic said, “The Service had no part in it, nor did it incite the crimes … as far as I know, one man can’t know everything.”

According to Balkan Insight, OSCE Representative on Freedom of the Media, Dunja Mijatovic, said, “I welcome the fact that there is an on-going investigation into the case of Dusko Jovanovic. I urge the authorities to ensure a thorough and transparent investigation to identify the perpetrators and bring them to justice.”