Sierra Leone’s audit report for the year 2021 released last week has unprecedentedly left out the Office of the President, leaving civil society in doubts over the credibility of its findings and increasing suspicion that President Julius Maada Bio is abusing the nation’s wealth for personal enrichment. 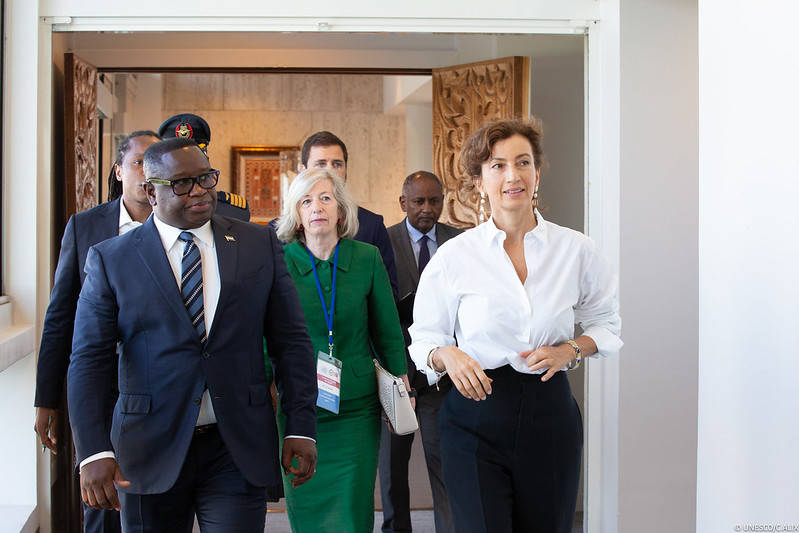 Julius Maada Bio (L) came to power in 2018 and will face reelection in June. (Photo: UNESCO/Christelle ALIX, Flickr, License)Annual audits are conducted by the Auditor General, who is, according to the 1991 Constitution, mandated to review financial management of all public institutions.

The report carefully scrutinized financial accounts of all government ministries and agencies, revealing a number of irregularities across the public sector such as double salaries, unauthorized cash withdrawals and salaries paid to ghost workers, which were estimated to total nearly US$1.5 million.

However, it did not make a single comment on financial management in the Office of the President, the Vice President and the First Lady.

“This is very unusual and there is definitely grounds for suspicion,” said Samuel Kallon, the Editor of local Africa24 Newspaper who spoke to the OCCRP.

“It used to be a tradition that no stone would be left unturned as offices of the President, Vice President and First Lady were audited,” he added.

The OCCRP reached out to the Audit Service for comment but was told that the responsible official had gone for prayers and would not be reachable until next week.

In 2020, President Bio stirred a lot of controversy when he, just a month before the release of the annual audit report, suspended the then Auditor General Lara Taylor-Pearce, who had been in office for 10 years and was reputed for her efforts to improve government accountability.

Taylor-Pearce was replaced until further notice and Bio announced that a tribunal would be set up to investigate her work but the purpose of the intended investigation remains unclear.

Africanist Press, a local investigative outlet, alleged that Bio’s decision was in fact motivated by Taylor-Pearce’s insistence to include damning evidence of graft and corruption in the Bio administration in the audit report.

Bio came to power in 2018 on a promise to root out corruption, replacing Ernest Bai Koroma who had ruled the country for 10 years.

Africanist Press has in recent years published reports claiming that Bio and his wife misappropriated millions of dollars of public money through unauthorized cash withdrawals and under the cover of travel and medical expenses.