Cambodian wildlife officials, black market dealers, and executives at a monkey breeding company were charged by U.S. federal prosecutors last week with running an illicit monkey trading scheme that smuggled thousands of endangered wild macaques from Southeast Asia to the U.S. to be used in lab research. 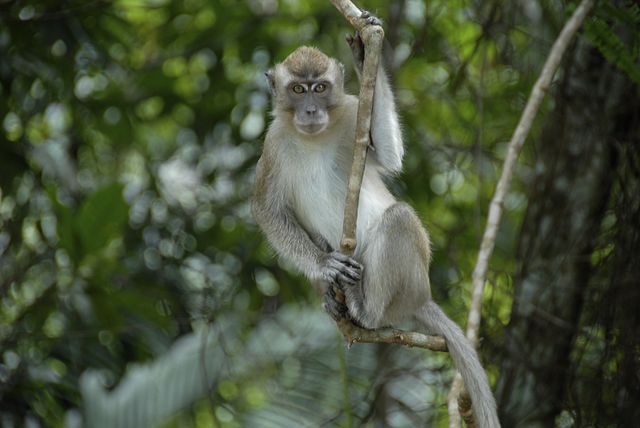 The long-tailed macaques are endangered petite primates native to Southeast Asia, and are protected under international trade law. (Photo: Peter Gronemann, Wikimedia, License)Eight were charged in Wednesday's indictment, including two top officials of the Cambodian Forestry Administration within the Ministry of Agriculture, Forestry and Fisheries. The remaining six co-conspirators were affiliated with Vanny Resource Holdings Ltd., a primate supplier firm with operations in Hong Kong and Cambodia.

If convicted, each defendant faces up to 5 years in prison for conspiracy, and up to 20 years for smuggling. They can also be fined up to $250,000 - or twice the financial gain prosecutors say they made during the scheme.

According to the prosecutors, Mashpal Kry, a deputy director at the Cambodian Forestry Administration, is alleged to be a part of the scheme that shipped thousands of wild long-tailed macaques, an endangered animal, to research facilities in the United States.

The primates were taken from national parks and protected areas in Cambodia, and shipped out under false labels as “captive bred”.

The long-tailed macaques, small endangered primates native to Southeast Asia, are protected under international trade law and require special permits to be imported into the U.S. where they are often used for biomedical and pharmaceutical research.

“Wild populations of long-tailed macaques, as well as the health and well-being of the American public, are put at risk when these animals are removed from their natural habitat and illegally sold in the United States and elsewhere," said Edward Grace, assistant director of the U.S. Fish and Wildlife Service’s Office of Law Enforcement, in a statement.

Kry was arrested Nov. 16 at the John F. Kennedy International Airport in New York on his way to a global wildlife trade summit in Panama.

Between 2017 and 2022, the official is alleged to have accepted bribes from conspirators to facilitate the scheme, and personally delivered the wild-caught primates to locations  including Vanny Resource Holding’s Cambodia facility.

Two top executives at Vanny Resources Holdings - its founder and owner James Man Sang Lau and general manager Dickson Lau - secretly conspired with black market collectors and corrupt officials in Cambodia to “acquire wild-caught macaques and launder them through the Cambodian entities for export to the U.S. and elsewhere,” the indictment said.

In 2020, Vanny Resources Holdings is alleged to have paid more than $2.5 million to seven black market suppliers for more than 14,000 wild long-tailed macaques.

“The macaque is already recognized as an endangered species by the International Union for the Conservation of Nature,” Juan Antonio Gonzalez, U.S. Attorney for the Southern District of Florida, said in a statement. “Greed should never come before responsible conservation.”