In what has been described as the single largest seizure of rhino horn in Singapore’s history, authorities at Changi Airport seized 34 kilograms, or around 20 rhinoceros horns, smuggled in two bags that were on their way to Laos from South Africa, Singapore’s National Parks Board said in a statement, Wednesday. 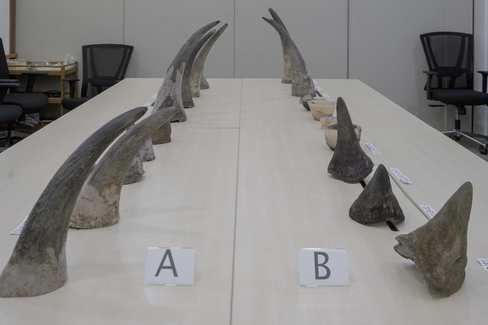 Rhinoceros are protected under the Convention on International Trade in Endangered Species of Wild Fauna and Flora (CITES) and international trade in rhinoceros horns is prohibited. (Photo: National Parks Board of Singapore)The discovery came to the help of the National Parks Board’s (NParks) K9 Unit, who sniffed out the two bags carrying more than US$800,000 worth of contraband.

“Singapore adopts a zero-tolerance stance on the illegal trade of endangered wildlife species, and their parts and derivatives,” the statement said. “The horns will subsequently be destroyed to prevent them from re-entering the market, disrupting the global supply chain of illegally traded rhinoceros horns.”

Rhinos are protected under the Convention on International Trade in Endangered Species of Wild Fauna and Flora (CITES,) of which Singapore is a signatory, and international trade in rhinoceros horns is prohibited. Still, the item is highly desired in some Asian countries, especially China, where in traditional medical practices they are used in remedies to cure everything from fevers to cancer.

According to NParks, genetic testing is being carried out to identify the species of the seized horns. Poaching and the illegal trade in horns have decreased in recent years but remain grave threats to rhinos, according to the Switzerland-based International Union for Conservation of Nature (IUCN).

The owner of the bags could face charges of possession of CITES-scheduled species without an authorization and if convicted, the smuggler would face up to two years behind bars as well a US$50,000 fine per scheduled species.

NParks stressed that the public must also play a key role in ensuring their purchases do not contain endangered species parts, and thus not contribute to the demand for the illegal trade of wildlife.