Of all Latin American countries, Venezuela and Bolivia are the worst when it comes to tackling corruption and Guatemala, Mexico and Brazil have again found themselves towards the bottom of the list, a study says. 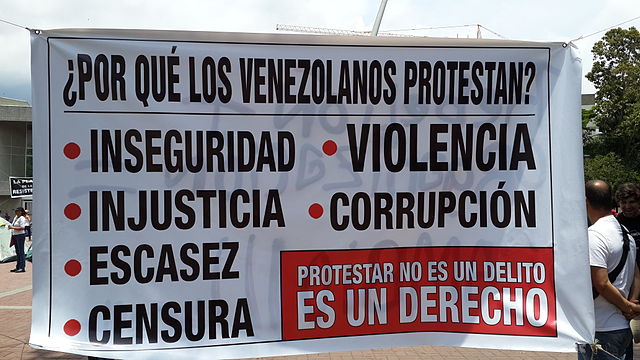 Tackling corruption in Venezuela is not improving. (Photo: Jamez42, Wikimedia, License) The 2022 Capacity to Combat Corruption (CCC) Index found that over the past year many countries in the region have relegated anti-corruption measures to a lower priority. The timing could not be worse, since Latin America continues to struggle with COVID-19 and economic issues like inflation, now compounded by Russia’s conflict with Ukraine.

To measure how effectively countries can combat corruption, the third edition of the CCC index – put together annually by the Americas Society / Council of the Americas (AS/COA) and Control Risks – examined legal capacity, democracy and political institutions and civil society and media responses.

According to the report, “some countries showed resilience, while others, including the region’s two largest countries Mexico and Brazil, saw new setbacks for key institutions and the anti-corruption environment as a whole.” Presidents Andrés Manuel López Obrador and Jair Bolsonaro have taken steps to undermine independent institutions.

In addition, “many of the judicial branches and anti-corruption agencies across the region have struggled in comparison to the mid-2010s, when the anti-corruption movement enjoyed greater popular support and government attention,” it added.

Nevertheless, the CCC index paints an overall scenario for 2022 as “one of relative stability following the clear setbacks of recent years.”

Despite Uruguay having registered a decline in its score for the first time since the Index was launched, it outperformed all 15 other countries for the third consecutive year. Costa Rica and Chile remained in the top three.

The bottom three ranked countries also remained the same as in 2021, which are Guatemala, Bolivia and Venezuela. However, Bolivia and Venezuela showed some signs of improvement, while Guatemala experienced the sharpest decline in the Index. Argentina, Brazil and Mexico also registered drops. These four countries’ scores have decreased each year since the Index was released.

Although Peru remains its most positive story of 2021, ranking fourth on the Index overall, President Pedro Castillo has faced a series of impeachment motions based on corruption accusations.

The Dominican Republic saw the greatest improvement in its score, continuing a two-year upward trajectory, climbing from tenth place in 2021 to fifth place this year. It boosted its overall score by increasing its legal capacity and advancing the assessment of international cooperation and anti-corruption agencies.