Canada Set to Give Russian Assets to Ukrainian Victims

In a busy week, the Canadian government levied sanctions against 203 individuals loyal to President Vladimir Putin and his war, proposed a new legislation to allocate frozen Russian assets to victims in Ukraine, and unanimously declared that the war itself amounts to genocide against the Ukrainian people. 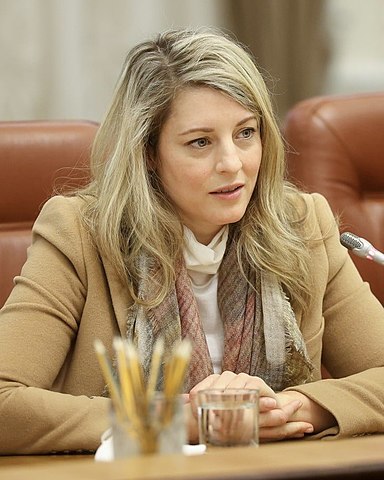 Minister of Foreign Affairs of Canada, Mélanie Joly. (Photo: Cabinet of Ministers of Ukraine, Wikimedia, License)Global Affairs Canada stated that the latest sanctions target 11 senior officials and 192 other council members of the so-called Luhansk and Donetsk People’s Republics “who are complicit in the Russian regime’s ongoing violations of Ukraine’s sovereignty and territorial integrity.”

The two republics are widely seen as illegitimate in the eyes of the global community, in addition to being little more than puppet governments under the Kremlin’s influence.

“Canada will not stand idly by and watch President Putin and his accomplices attempt to redraw the borders of Ukraine with impunity,” said Mélanie Joly, Minister of Foreign Affairs. “Canada is using every tool at its disposal to ensure that the rules-based international order is upheld and that those complicit in violations of international law answer for their crimes.”

The move follows another wave of sanctions imposed last week, in which the government targeted 14 individuals closely linked to Putin and his authoritarian regime.

Before Putin ordered his forces into Ukraine two months ago, his backing of separatist insurgencies in the War in Donbass had claimed over 10,000 lives.

As a means to alleviate the Ukrainian people’s suffering, the Canadian government also proposed Wednesday new legislation that would redistribute frozen Russian assets on behalf of the war’s victims.

“There was a weakest link in our sanctions package,” Joly told CTV News, “which was the ability for the government to be able to sell the assets that were seized and afterwards to use the profits to compensate the victims of this war against Ukraine.”

The Foreign Affairs Minister noted that Canada is the first G7 country to propose such legislation. Others, such as the Magnitsky Act, only freeze Russian assets, essentially depriving them of their entire value.

“We knew we needed to go further,” Joly said.

Several nations around the world have already sanctioned hundreds of Russian oligarchs for billions of dollars. These assets, Joly observed, could go a long way in rebuilding Ukraine.

And on the same day, Canadian Member of Parliament Heather McPherson successfully passed a motion in House of Commons to recognize that Russia’s war against the Ukrainian people amounts to genocide.

“There is clear and ample evidence of systemic and massive war crimes and crimes against humanity being committed against the people of Ukraine by the Armed Forces of the Russian Federation directed by President Vladimir Putin and others within the Russian Parliament,” the lawmaker said in a prepared statement.

Amongst the war crimes condemned by the Canadian government include the willful torture, rape, and killing of Ukrainian civilians at the hands of the Russian Armed Forces, as well as other mass atrocities.

McPherson, who serves as her party’s leader on foreign affairs, led the House in passing the motion unanimously.