With Russian oligarchs in the global spotlight and U.K. authorities holding his two executive jets, sanctioned billionaire Eugene Shvidler may be tempted to hide out in one of his US$15-million flats in central London, which have remained secret from the public until now. 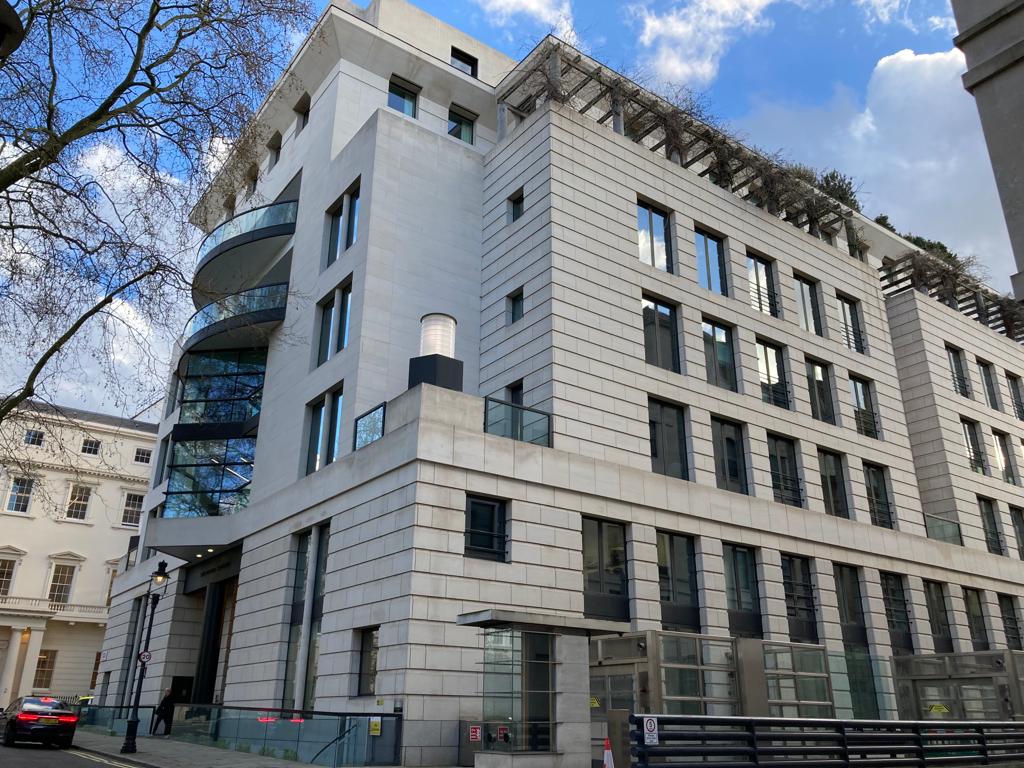 Shvidler owns two flats in this London building. (Photo: Julia Wallace/OCCRP)The two apartments housed in the same building are among a handful of newly-uncovered assets owned by oligarchs, many of whom are facing sanctions for ties with Russian President Vladimir Putin, who is orchestrating a brutal war against Ukraine.

Journalists also found an Airbus helicopter owned by Abramovich through a British Virgin Islands shell firm. The aircraft was deregistered in the U.K. a month before he was sanctioned, and re-domiciled in Russia.

The homes, horses, and helicopter are revealed today in the updated Russian Asset Tracker, an initiative coordinated by OCCRP in an ongoing collaboration with more than 20 international media partners. The tracker maps out the global financial interests of alleged Putin allies like Abramovich and Shvidler, childhood friends who remained close growing up and got extravagantly rich together.

The U.K. slapped sanctions on Shvidler on March 24, noting his “close business links” to Abramovich, who has an estimated net worth of $12 billion and was sanctioned two weeks earlier.

Oliver Lister, a representative of Shvidler, called it “inappropriate, libelous and downright wrong” to connect him to Russia’s invasion of Ukraine.

“Mr. Shvidler has no involvement whatsoever. There are no ties to the Kremlin,” he said in an email.

Lister declined to comment on assets including the two flats Shvidler purchased in the posh St. James area of London in 2010 for a total of 20 million British pounds ($26 million). Nor did he answer questions about the $2.7-million New York City apartment that reporters found in the name of Shvidler’s son, Daniel.

Lister said Shvidler left the Soviet Union in 1989, has never held a Russian passport, and has not returned to the country since 2007. Shvidler has U.K. and U.S. citizenship, he added.

The U.K. Foreign Office declined to comment on Shivindler’s citizenship, or the specific reasons for sanctioning him.

While Shvidler may not be a Russian citizen, strong ties to his homeland were the foundation of his considerable wealth, which the Foreign Office estimates at $1.6 billion. His assets include properties like Château Thénac, a vineyard on the site of a 12th-century monastery in France that he bought in 2001 and restored.

Shvidler is widely reported to have gone into business with Abramovich in the 1990s, acquiring the oil company Sibneft from the Russian government in an allegedly corrupt deal. That decade saw the emergence of the “oligarchs,” entrepreneurs who capitalized on connections and corruption during the chaotic market liberalization that followed the collapse of the communist Soviet Union.

Abramovich and Shvidler reportedly sold Sibneft in 2005 to Russia’s state energy firm Gazprom for $13 billion –– more than eight times what they had paid for it. Much of their global empire was built on that windfall.

But since Putin’s invasion of Ukraine in February, the connections that Abramovich, Shvidler and other oligarchs have to Russia’s leadership have come back to bite them.

In addition to the U.K., Abramovich faces sanctions from the European Union and Canada.

He has been forced to put his beloved Chelsea Football Club up for sale, and he sent two of his superyachts speeding towards Turkey to escape being seized by European authorities. The value of his 29 percent of the steel giant Evraz plummeted after trading on the London Stock Exchange was suspended when the U.K. sanctioned him.

Abramovich did not respond to requests for comment sent to representatives.

Shvidler also lost money as Evraz shares tanked, and he was forced to give up a seat on the company’s board of directors.

Authorities in the U.K. have detained two jets owned by Shvidler, said Department for Transport spokesperson Marco Barbato, adding that one of them has been deregistered. The other aircraft is registered in Luxembourg, and both will be held in the U.K. until the secretary of state for transport releases them.

“A direction to detain does not transfer ownership of the aircraft, but instead establishes that the asset has been frozen,” Barbato added.

He said the department is preventing another jet registered as M-TINK from leaving the country while its ownership is being investigated.

OCCRP reported in 2020 that M-TINK, a Dassault Falcon 7X, is owned by Oleg Tinkov, the founder of Tinkoff Bank. The U.K. sanctioned him on March 24, estimating his net worth at $1.6 billion.

Tinkov is among dozens of oligarchs included in the Russian Asset Tracker, which will continue to expand as reporters uncover where they have stashed wealth around the world.