At the request of the European Public Prosecutor’s Office (EPPO), Bulgarian authorities conducted 25 searches in three cities and questioned 10 people about companies suspected of having fraudulently obtained EU funds. 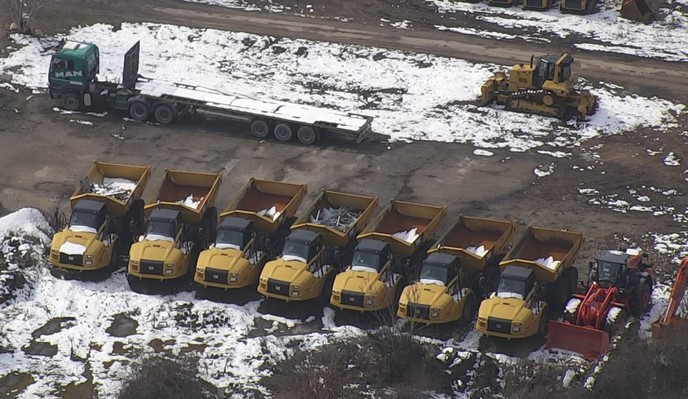 During the search of homes, offices, warehouses, and vehicles in Sofia, Pernik and Montana officers seized documents and found dumpers, excavators, and front loaders valued at six million euro (US$6.58 million) and believed to have been obtained thanks to the received funds. (Photo: EPPO, Twitter, License)Officers questioned owners, managers, and representatives of nine construction companies who are believed to have been part of an organized criminal group that presented falsified documents to receive the funds.

During the search of homes, offices, warehouses, and vehicles in Sofia, Pernik and Montana officers seized documents and found dumpers, excavators, and front loaders valued at six million euro (US$6.58 million) and believed to have been obtained thanks to the received funds.

The EU funds being accessed by the Bulgarian companies includes the “Innovations and Competitiveness” program. According to the EU Commission, the program seeks to promote small and medium enterprises (SMEs) in Bulgaria as a part of the implementation of the EU Structural and Investment Funds (ESIF).

The funds are meant to increase Bulgaria’s economic competitiveness by creating more jobs and growth to meet the ‘Europe 2020’ targets.

The European Union launched in 2021 a unique supranational public prosecution office in charge of criminal investigations and prosecutions against the Union’s budget. The body works closely with national authorities throughout the Union.

In January, OCCRP reported on a bribery case handled by the EPPO against a State Fund Agriculture (SFA) official.

The unnamed defendant was accused of soliciting a bribe from a farmer and owner of an agricultural company in order to access subsidies from the EU’s Rural Development Programme, which in Bulgaria is managed by the SFA.

Fraud and misuse of EU funds is in the hundreds of millions of euros, Atanas Tchobanov, a Bulgarian investigative journalist, told OCCRP at the time.