Brazil Charges President with Illicit Enrichment Ahead of Elections

Prosecutors charged Brazilian President Jair Bolsonaro with illicit enrichment, in a case related to his former maid in Rio de Janeiro who allegedly received a salary as a government employee while he served as a lawmaker in Brasilia. 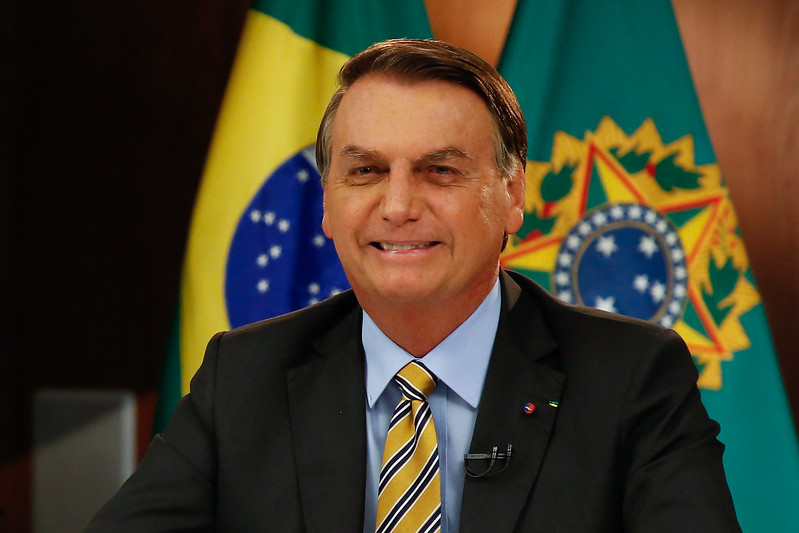 Prosecutors charged Brazilian President Jair Bolsonaro with illicit enrichment, in a case related to his former maid in Rio de Janeiro who allegedly received a salary as a government employee while he served as a lawmaker in Brasilia. (Photo: Anderson Riedel/Palácio do Planalto, Flickr, License)At the same time, the Brazilian Superior Court ordered a former prosecutor to pay the equivalent of some US$15,000 to Bolsonaro’s political rival, former President Luiz Inacio Lula da Silva, for alleged “moral damages” he caused when he portrayed during a press conference Lula as the leader of a criminal network.

The moves come at a sensitive time when Lula is expected to challenge Bolsonaro at the upcoming elections this fall. Right now, Lula is leading the polls.

Bolsonaro and his former employee in Congress, Walderice Santos da Conceição, were accused of illicit enrichment at the expence of the state treasury at a time when Bolsonaro was a representative in the lower house of Congress.

Santos was allegedly fictively employed in Congress from 2003 to 2018. Bolsonaro dismissed her shortly after the case hit the Brazilians’ major newspaper pages. In late 2018, Bolsonaro was elected the 38th president of Brazil.

According to the prosecutor’s press release, Santos never went to her place of work in Brazil’s capital, Brasília, but provided maid services to his family. She cleaned also his summer house and took care of his dogs in the southern state of Rio de Janeiro, 1,178 kilometers away.

Notwithstanding, in her free time, Santos ran an açaí store, which would be strictly forbidden for any Brazilian representatives’ employees.

Authorities said that Bolsonaro was, at the time, fully aware that Santos had not provided the services corresponding to her position and falsely attested to her attendance at work in Congress. Now, Bolsonaro’s fate is in the hands of a Brazilian court.

Meanwhile, one of the most prominent prosecutors dealing with Latin America’s biggest corruption scandal, Operation Lava Jato (Car Wash), Deltan Dallagnol, has been ordered to pay moral damages to Lula because he used, back in 2016, an image of the former president in a PowerPoint presentation that portrayed Lula as the leader of a criminal scheme.

According to court filings, Dallagnol had used qualifications that discredited Lula’s honor and image. Moreover, Brazilian authorities believe the then prosecutor accused the former president of things that were not even included in the complaint.

“This spectacularization of the episode is neither compatible with what was the subject of the complaint, nor does it seem compatible with the seriousness required to investigate these facts,” said Federal Judge Luis Felipe Salomão.

Dallagnol said on Twitter, “this is what happens when you fight corruption and injustice in BR [Brazil]”.

Former Lava Jato Judge Sergio Moro said in a video that Brazil was a “country turned inside out. This is wanting to turn right into wrong and wrong into right.”

The court decision outraged Brazilians and they spontaneously donated about $100,000 for Dallagnol, way more than the prosecutor needs to pay. He said that the rest will go to hospitals that treat children with cancer and autism.

Since Dallagnol left the Prosecutor’s Office in 2019, he never hid his political intentions in interviews as well as on Twitter. Late last year, he announced his candidacy for the lower house of Congress. Dallagnol spares no criticism of Brazil’s Supreme Court, which has acquitted and overturned those convicted in the Operation Lava Jato investigation, paving the way for politicians like Lula to challenge Bolsonaro in this year’s presidential election.

In the meantime, Bolsonaro has been facing another election-year scandal. Two evangelical pastors have allegedly persuaded him to request the Education Ministry to steer federal funding to their friends. Education Minister Milton Ribeiro resigned over the scandal on Monday.

Transparency International reported recently that Bolsonaro’s administration is responsible for unprecedented setbacks to transparency and controls of the budget allocations.

Brazil’s former presidents have more or less all faced corruption or embezzlement accusations.

Former President Dilma Rousseff was impeached amid a massive corruption scandal, and her then Vice-President and successor Michel Temer faced various criminal charges of corruption and bribery. Later, these accusations had also foundered for a variety of reasons.

At the time, the Brazilian political analyst José Álvaro Moisés said “two president-elect impeachment proceedings in 30 years are an indication that something is not working well.”