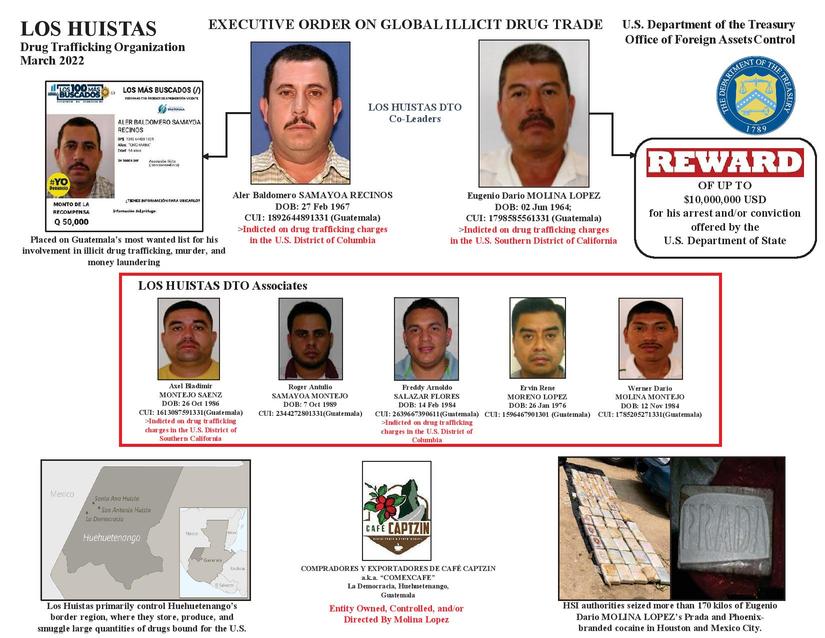 The United States sanctioned seven suspected high-ranking members of the Los Huistas, Guatemala’s prominent criminal gang, accusing them of global illicit drug trade and cooperation with Mexico’s deadly Sinaloa and Jalisco cartels. (Photo: U.S. Department of the Treasury, License)The sanctions mean that U.S. citizens and companies are now prohibited from doing business with them, and their U.S. assets will be frozen.

The move came after Operation Guerrilla Unit, a long-term U.S. investigation that targeted several high-ranking Guatemalan drug traffickers and their suppliers operating out of northwest Guatemala.

It is one of the “most significant, comprehensive and large-scale drug trafficking prosecutions," said U.S. Attorney Randy S. Grossman. “We are working tirelessly to dismantle cartels by taking down the leaders, one by one.”

It is believed that the gang primarily controls one of Guatemala’s regions that borders Mexico. It is a well-known hub of contraband and criminal activity, and the group was allegedly involved in at least drug trafficking, murder, and money laundering.

The Department of State has reported that drug kingpin Don Dario had allegedly trafficked tonnes of cocaine from Peru, Colombia and Bolivia into Mexico and towards the U.S. in cooperation with his well-established connections with the Sinaloa Cartel and the Jalisco New Generation Cartel.

Molina, Chicharra, and his son-in-law, the representative of the Central American Parliament Freddy Arnoldo Salazar Flores, were indicted for international drug trafficking together with Axel Bladimir Montejo Saenz. All four appear on the recent sanction list.

The indictments have the potential to shake up Guatemala’s elite and criminal underworld. Los Huistas is often referred to as a criminal structure that operates through a complex web of companies, lawyers and politicians linked to illicit activities.

Salazar Flores had apparently given a US$10 million contribution to a political party in the last Guatemalan electoral campaign, local media reported.