The United Kingdom’s National Crime Agency (NCA) arrested a man suspected of being a member of a human trafficking group that was smuggling mainly Vietnamese migrants into the country, the agency reported on Wednesday. 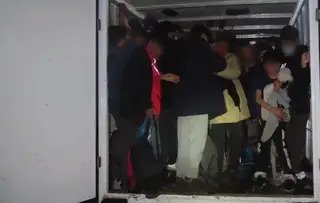 The United Kingdom’s National Crime Agency (NCA) arrested a man suspected of being a member of a human trafficking group that was smuggling mainly Vietnamese migrants into the country. (Photo: EUROPOL, License)Authorities arrested 32-year-old Mai Van Nguyen, of Holloway Circus, Birmingham in the Woolton area of Liverpool on Tuesday morning. He was questioned and charged with facilitating human trafficking and money laundering.

The arrest is part of a larger investigation into the smuggling of mainly Vietnamese migrants that came into the country on the backs of trucks in August, September and October 2020. The investigation has already produced a number of arrests and two charges.

Ho Sy Quoc, 22, of Handsworth, Birmingham, was arrested in September 2021 and is to be prosecuted at the city’s Crown Court on February 28.

Another suspect, 32-year-old Karzan Mohammed, of Brandwood Street, Daubhill, also arrested in September 2021 and charged with facilitating human trafficking after he answered bail in January. Mohammed was to appear before court on Wednesday, February 9.

In addition, authorities charged a Bolton taxi driver accused of being involved in the same people smuggling scheme.

Commenting on the arrests, NCA Branch Operations Manager Paul Boniface said that “this is the latest phase of an ongoing investigation into the activities of a significant smuggling network, bringing people illegally into the U.K. and then laundering the profits.”

“These groups treat people as a commodity to be profited from and are quite happy to put lives at risk,” he said. “We are determined to do all we can to stop them.”

The agency said that it is currently investigating more than 50 cases of organized migrant smuggling and individuals involved in human trafficking.