After receiving an anonymous email alert, Spanish National Police (Policía Nacional) reported that they arrested 27 suspected members of a criminal group accused of sexual and labor exploitation of women and saved 19 of its victims. 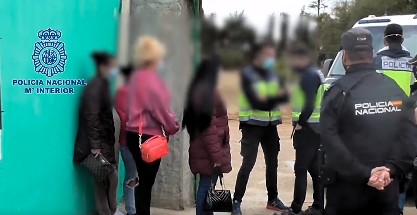 After receiving an anonymous email alert, Spanish National Police (Policía Nacional) reported that they arrested 27 suspected members of a criminal group accused of sexual and labor exploitation of women and saved 19 of its victims. (Photo: Policía Nacional, Twitter)The organization based in Murcia, Spain, is believed to have occasionally brought women from Honduras and Paraguay to Spain in order to use them for sexual and working purposes.

The network consisted of two branches - both led by women. The first branch, made up of a Paraguayan family clan, is believed to have accumulated significant wealth by sexually exploiting Paraguayan women and trafficking drugs.

The second branch, led by a Honduran woman, brought victims from Honduras to Spain to work as caregivers for the elderly, charging the women up to US$8.000. If they couldn’t pay the installed debt, the victims would be sexually exploited by the Paraguayan clan in order to pay it back more quickly.

In addition, members of the group mistreated the victims, threatening that they would lose property in their countries of origin if they didn’t pay back the imposed debt.

The police concluded the investigation, arresting the 27 suspects, including the two leaders of the branches. One of the arrested people is from Toledo, while 26 are of Murcia. For nine of them, the authorities decreed provisional detention.

In addition, the officers searched a house used as a brothel, finding a hole of very small dimensions, which would have been used to hide women in case of a police raid. They also  seized over $1.100 in cash, six vehicles as well as numerous documents and electronic devices.

The police action was made possible thanks to an anonymous email sent to an address specially set up for this purpose, in addition to a phone line whistleblowers can call to report human trafficking.