With the help of Europol, the Spanish National Police dismantled an organized crime network involved in human and drug trafficking as well as property crime, and arrested 24 of its suspected members, the European police agency reported on Monday. 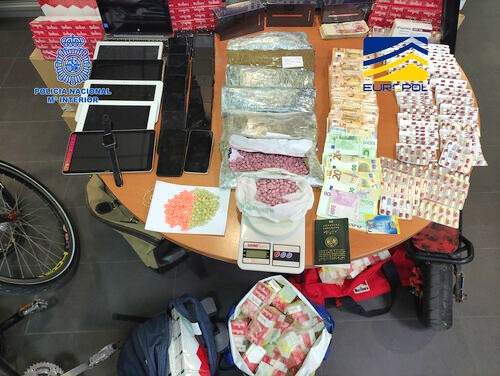 With the help of Europol, the Spanish National Police dismantled an organized crime network involved in human and drug trafficking as well as property crime, and arrested 24 of its suspected members. (Photo: Policia Nacional)The criminal group is suspected of trafficking migrants from Algeria to Spain and fugitives from Europe to the Middle East and then using the same boats to smuggle goods such as synthetic drugs, tobacco and documents, thus making huge profits.

The investigation showed that the group organized the smuggling of 250 migrants to Spain 54 times in the last several months. On December 14, 2021, officers searched nine houses and a warehouse used by the suspects, seizing four vehicles, 3.5 kg of ecstasy pills worth about US$173.580, 56 grams of phencyclidine and 710 boxes of smuggled tobacco.

In addition, the police found stolen goods including 61 mobile phones and other electronic equipment, competition bikes, electric scooters, as well as documents and about $45.500 in cash.

The authorities discovered that the suspects charged migrants about $5.600 to smuggle them from Algeria to Almería, Spain, and between $800 and 1.100 from Spain to France, using forerunner cars to cross the French border.

The criminal group was very well structured, and each member had a particular role in it. Some of them were responsible for tasks management, others for accommodation and transportation, and the officers found that the leader of the group and his wife even used their nine-year-old son as a drug courier. The smuggling was financed by hawaladars connected to the group, with high rates of interest.

As a support to the Spanish National Police, Europol helped the exchange of information and provided analytical support. On December 14, Europol sent an expert to Spain to help the authorities with the cross-checking of operational information against Europol’s databases, as well as with data extraction and digital evidence analysis.