U.S. authorities returned to Mali a massive trove of looted artifacts, which border officials in Texas discovered over a decade ago, the U.S. Department of Homeland Security said in a statement. 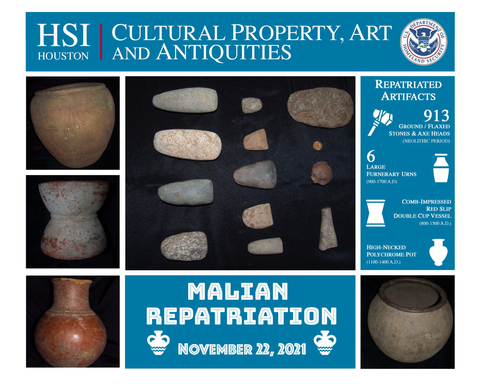 U.S. authorities returned to Mali a massive trove of looted artifacts, which border officials in Texas discovered over a decade ago. (Photo: U.S. Department of Homeland Security, Twitter)The artifacts first came to attention in March 2009, when U.S. Customs and Border Protection (CBP) contacted Homeland Security (HSI) officials in Houston to let them know that they had encountered a suspicious container at the Port of Houston, the statement said.

“The container, which originated from Mali, claimed to be carrying replica cultural items. Upon further inspection, the items appeared to be authentic and were covered in blood and fecal matter, which sent red flags to HSI and CBP officials for possible antiquities smuggling,” it added.

Among the artifacts were funerary urns, a comb and pot as much as a millennia old, and over 900 flax stones and ax heads from the neolithic period.

“A nation’s cultural property and antiquities define who they are as a people,” HSI’s Houston Special Agent in Charge Mark Dawson explained. “No one has the right to loot or destroy that heritage and history.”

Although all of the artifacts were taken into HSI’s possession in 2012, their return to Mali was delayed by a period of civil unrest in the West African country.

“Trafficking in antiquities is estimated to be a multi-billion-dollar transnational criminal enterprise,” HSI said.

It’s beneficiaries are not just high society art aficionados. Often on the supply side, the trade is a major funding source for criminal and militant groups. The looting of cultural property from active war zones is considered a war crime under the 1954 Hague Convention.