After the close of the 2021 Climate Change Conference (COP26), activist groups are saying that despite the focus on healthy oceans and maritime sustainability, one pressing topic remained unspoken -- illegal fishing. 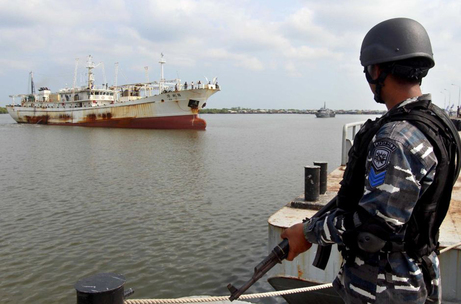 “Illegal fishing takes different forms, but large-scale industrial operators do the most damage to ecosystems and the environment,” said the Institute for Security Studies, an NGO covering Africa.

As climate change already puts further strain on already overexploited fish stocks, IUU fishing is causing problems both at sea and on land.

In addition to threatening food supplies for coastal communities who have long relied on fishing, “illegal fishing erodes community trust in law enforcement, creating a sense of lawlessness and neglect,” the ISS said. “This is an environment in which organised crime thrives, and together with a loss of livelihoods, can fuel local-level violence and other criminality.”

For the criminals, it's a lucrative trade, valued at as much as $17 billion. Somewhere between eight and 14 million tons are caught annually, according to a report by SeafoodSource.

However, the score doesn’t always filter down to the crew. Forced labor is pervasive in illegal fisheries around the world, according to a 2020 report released by the High Level Panel for a Sustainable Ocean Economy.

“Fishing vessels are often also used to smuggle people, drugs and firearms, as well as to carry out piracy or terrorist attacks,” a 2020 Interpol statement said.

The shore that lines the 13 nations who border the Gulf of Guinea, has become one of the most dangerous regions in the world for maritime piracy.

IUU fishing doesn’t just intersect with crimes that happen at sea, but has also spawned large criminal networks on shore to launder illicit gains and traffic to the catch to buyers and markets.