Maritime and fishing communities around the world are particularly vulnerable to organized crime which threatens an economy that globally puts 17% of protein on the table, says a new report released by the High Level Panel for a Sustainable Ocean Economy. 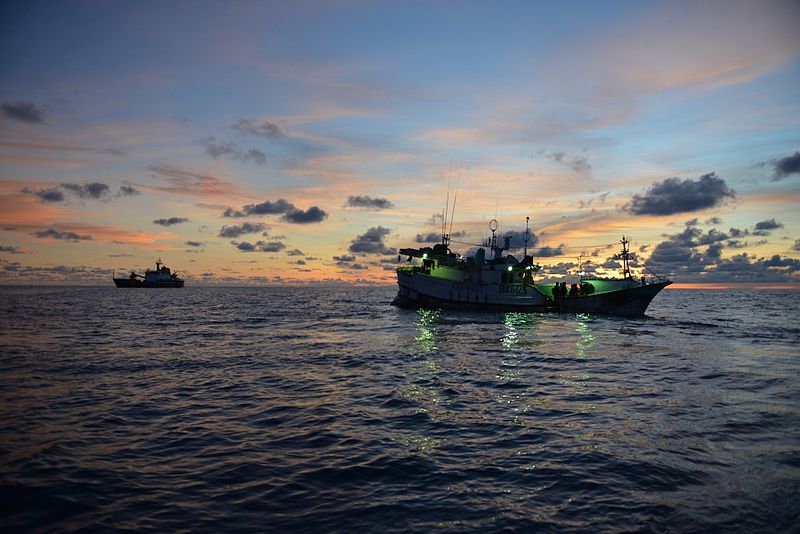 In the Gulf of Guinea, large-scale illegal fishing is estimated to amount to 40–65 percent of the reported catch (Source: Wikimedia Commons)“Despite threatening coastal states’ food security, fostering human rights abuses and diverting government revenue to the shadow blue economy, organised crime in the fisheries sector is an often-overlooked barrier to securing a sustainable ocean economy,” the document claims.

The types of organized crimes which threaten that economy include everything from fraud and corruption to smuggling and slave labor, according to the report.

Fraud is rampant almost everywhere in the supply chain, from fishermen falsifying how much they caught or from where they sourced their catch to evade sanctions on overfishing to processors mislabeling products to avoid taxes and tariffs.

As for slavery, “forced labour in the fisheries sector appears to be pervasive around the globe,” says the report. “Criminal networks in fisheries use forced labour to significantly cut costs and boost profits.”

A sustainable ocean economy requires balancing use of the ocean space and its resources, as well as the long-term carrying capacity of the ocean’s ecosystems, and maritime organized crime poses a major threat to that balance, the Ocean Panel report explains.

Seafood accounts for some 17% of protein consumed globally, and a sustainable ocean economy is essential for keeping that food source on the table.

“Organised crime in the fisheries sector in the form of large-scale overfishing has been shown to sharply reduce commercially exploitable fish stocks,” said the report. “It is imperative to curtail illegal fishing to prevent its further adverse impact on food security and coastal livelihoods.”

Curtailing it is no small matter however, as in many parts of the world illegal fishing has grown into a whale of an industry far too large for local enforcement to handle.

In Guinea Bissau alone, more than half of the industrial catch landed, valued at $260.7 million, is caught illegally. Only a third of the remaining catch is captured by the local economy through fishing fees and access agreements, the report says.

Without awareness, little change is likely, the Ocean Panel says.

“The world community remains largely uninformed of the evidence, or even existence, of transnational organised crime in the global fishing industry as a distinct problem alongside global efforts to secure a sustainable fisheries resource,” it claims.

“Only when all states share a joint understanding of the problem at hand can technical solutions to address the problem be implemented.” the report concludes.