Kyiv Post’s Former Staffers Band Together to Save its Values

After the temporary shut down and gutting of Ukraine’s English-language weekly newspaper, its former staffers are hoping to start a new outlet that will have the editorial independence the Kyiv Post had. 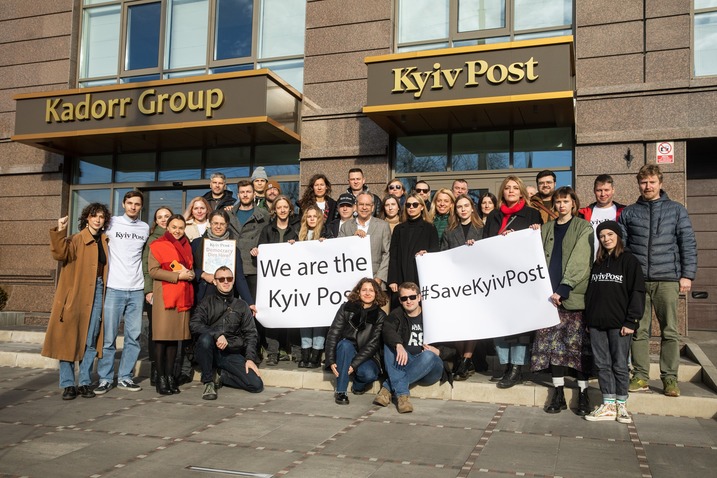 Staff of the Kyiv Post hope they will save their independent newspaper. They call for help. (Photo: Save the Kyiv Post, Facebook)“If we cannot save the Kyiv Post brand, we can at least save its values. We are therefore ready to launch a new publication,” they said in a statement last week.

The move comes after the Post's current owner, Odessa-based construction tycoon Adnan Kivan, shut down the paper and fired its entire staff in one day, saying he was planning to relaunch it as a Ukrainian-language newspaper. The paper’s staff saw this as an “attempt to infringe on our editorial independence.”

“Tensions between the newsroom and the owner increased in mid-October, when Mr. Kivan unilaterally decided to launch a Ukrainian version of the Kyiv Post, headed up by his appointee,” the statement said. The staffers said that “Mr. Kivan did not inform the newsroom of his plans – we found out through a public Facebook post.”

The staffers were worried that the Ukrainian publication would leverage the Posts brand, built as a symbol of independent journalism over 25 years, to publish stories meant to serve Kivan's own interests.

The team suggested to Kivan that he sell the paper, but he refused. Kivan has in turn offered them the opportunity to return to the newsroom under his newly appointed leadership, but they too have refused.

“The team has decided to decline this offer, as we consider it impossible to work with an owner who seeks to interfere in editorial decisions,” the statement said.

The Kyiv Post has operated independently across Ukraine since 1995, and was bought by Kivan in 2018. At the time, he reportedly said “I highly value the work of Kyiv Post journalists and intend to preserve editorial independence.”