Hours after they were published on Sunday, the Pandora Papers revelations about how part of the globe’s elite has used offshore companies to evade taxes and park undeclared wealth in real estate and other assets have prompted outrage and calls for investigations. 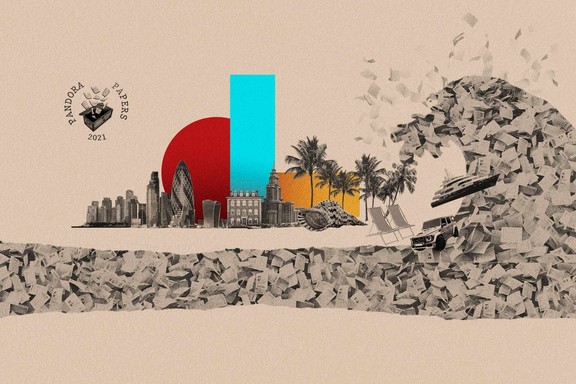 The Pandora Papers, based on almost 12 million documents leaked from 14 companies that provide corporate services in offshore jurisdictions, expose some of the most prominent current or former leaders and politicians as beneficiaries of offshore accounts. (Illustration: James O'Brien, OCCRP)“It’s beyond disgusting!” a Facebook user commented after having read the leak’s findings.

Some said the findings were “disturbing” and “depressing,” but “unsurprising.”

The Pandora Papers, based on almost 12 million documents leaked from 14 companies that provide corporate services in offshore jurisdictions, expose some of the most prominent current or former leaders and politicians as beneficiaries of offshore accounts.

Jordan’s King Abdullah II, who was found by ICIJ to be the owner of 14 properties worth over US$100 million through a network of offshore companies registered in the British Virgin Islands and Panama — two notorious tax havens — saw the revelations as an attack against his country.

“There is a campaign against Jordan. It is not the first, and we are stronger than these campaigns,” he was quoted by local media on Monday as saying.

In its wake, Jordan’s Royal Hashemite Court said that the investigation’s findings contain “inaccuracies,” and have “distorted and exaggerated the facts,” adding that the Court “maintains its right to undertake the necessary legal procedures.”

The uncovered properties are located in some of the world’s most expensive areas; from Central London and Ascot in the U.K., to Georgetown and Malibu in the U.S., but the Royal Court said that those residences are “no secret,” and that it is “not unusual nor improper” for a head of state to have such properties, which are used by the King and his family during official visits, private visits, or to host officials and foreign dignitaries.

The Court also maintained that the properties were “personally funded” by the King, not the state budget or treasury, and that any connections made between the two are “baseless and deliberate attempts to distort facts.”

One of the most shocking stories in the Pandora Papers collection is OCCRP’s investigation about Azerbaijan's President Ilham Aliyev’s son, Heydar, who owned four buildings in Mayfair - one of London’s most expensive areas - when he was 11.

All in all, nearly $700 million worth of properties in London are owned by Aliyev’s family and associates, according to the Pandora Papers.

In Baku, award-winning investigative journalist Khadija Ismailova summed up the essence of these revelations in a very sober Facebook post.

She commented on a video of a father carrying his daughter through a fast-water creek barefoot, to go to school. The young girl appeared 10 to 11 years old - the age at which Heydar would have had properties worth millions in Dubai and London, she noted.

“1,000 out of the 33 million spent on properties in London would be enough to build a bridge over this river,” Ismayilova wrote.

“This is where our missing hospitals are. This is where the pay-packets sit of all the extra teachers and firefighters and public servants we need,” Oxfam International’s Tax Policy Lead, Susana Ruiz, said. “Whenever a politician or business leader claims there is ‘no money’ to pay for climate damage and innovation, for more and better jobs, for a fair post-COVID recovery, for more overseas aid, they know where to look.”

Pakistan’s Prime Minister Imran Khan “welcomed” the findings, and vowed to investigate and take action against those found to have done wrong.

“I call on the international community to treat this grave injustice as similar to the climate change crisis,” he tweeted. “If unchecked, inequalities between rich & poor states will increase as poverty rises in the latter. This in turn will lead to a flood of economic migration from the poor to the rich states, causing further economic & social instability across the globe."

More than 700 Pakistanis, including cabinet members, ministers, financiers, retired generals, businessmen and media owners have been mentioned in the Pandora project.

The country’s Information Minister, Fawad Chaudhary, told OCCRP on Monday that the prime minister has set up a team “under his Inspection Commission to investigate the Pandora Leaks."

Others couldn’t see any wrong in the findings.

Putin's spokesman Dmitry Peskov said that the Russian government didn't see "any hidden wealth in the Pandora Papers, no reason for official investigations.”

The International Consortium of Investigative Journalists said that its project identified “nearly 3,700 companies with more than 4,400 beneficiaries who were Russian nationals – the most among all nationalities in the data. The figure includes 46 Russian oligarchs.”

Cypriot President Nicos Anastasiades also denied wrongdoing in a statement issued after reporters revealed that a law firm he once founded and which is still named after him, had helped a Russian senator hide his assets.

While the Czech Republic said it will investigate those named in the Pandora project, Prime Minister Andrej Babiš, who allegedly transferred $22 million through offshore companies and bought a chateau on the French Riviera, said he expected an attack ahead of elections.

As the findings of the Pandora Papers reverberate across the globe, prompting calls for investigations and resignations, some reporters who took part in the project are beginning to feel the heat too.

Noël Konan, a journalist from the Ivory Coast and part of the Pandora Papers reporting team, is already facing pressure to drop a story revolving around his country’s politicians.