Interpol circulated a global alert on Monday, warning the general public of organized crime groups that seek to profit off of selling fake COVID-19 vaccines. 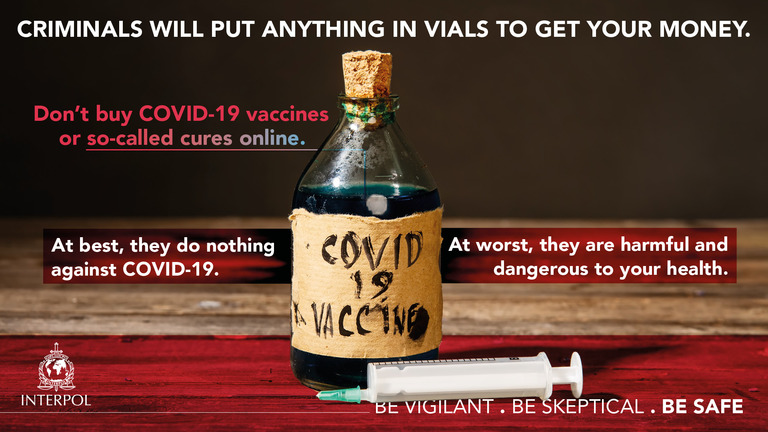 The alert, circulated amongst all 194 members, provides insight into the modus operandi utilized by organized crime groups in this particular scam.

These criminals have managed to obtain both professional and personal email accounts of their targets, as well as their phone numbers, according to the agency.

“With the ongoing pandemic and efforts of countries to safely and quickly vaccinate their citizens, it is vital that the roll-out process is protected from manufacture to delivery,” Interpol Secretary General Jürgen Stock said, underlining the gravity of this public health threat.

This is not the first COVID-related global alert circulated by the world police body.

In March earlier this year, Interpol and the United States's Homeland Security Investigations became aware of criminal organizations producing, distributing and selling fake vaccines. Given the unknown origin of these counterfeits, they warned that injecting them into the body could pose significant health risks.

Such criminal networks have no qualms preying “on people’s fears in order to make fast cash,” according to Stock.

For over a year now, health sectors around the globe have been overloaded in terms of incoming patients, ICU bed shortages, and inadequate staffing figures. Criminal networks see this as a lucrative opportunity.

Interpol reports that such networks have enacted ransomware attacks against hospitals, laboratories, and other targets. These attacks block their computer systems until a ransom is surrendered, thus hindering their ability to fight back against the pandemic.

In response to this crisis, the Global Financial Crime Task Force (IGFCTF) was mandated last year with enhancing international cooperation between the public and private sectors on matters such as cyber-enabled fraud, money laundering schemes, and COVID-related crimes.