For the first time since the 18th century, a cardinal walked on Tuesday through the hallowed halls of the Vatican Museums to face trial for embezzlement, extortion, money laundering and abuse of office. 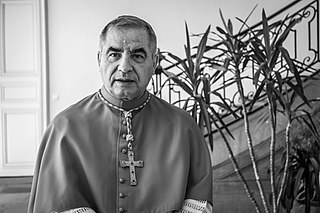 After reports of how Becciu misappropriated church funds surfaced in September, Pope Francis took swift action and fired his former close ally. (Photo: Claude TRUONG-NGOC, Wikimedia, License)Cardinal Giovanni Angelo Becciu is the star defendant in what is being called the biggest criminal trial in the Vatican’s modern history. Becciu denies the charges and claims that he is being made a scapegoat to protect more senior church members.

Together with nine other defendants, he will be taking the stand to defend how they mishandled tens of millions of dollars in Holy See funds. The hearing on Tuesday, of which only two defendants—including Becciu—attended in person, was procedural. The trial will adjourn on October 5th. All accused have asserted that they are not guilty.

After leaving the courtroom, Becciu’s legal team released a statement, obtained by the OCCRP, saying that Cardinal Becciu is feeling assured in how the case will unfold. “He calmly awaits the continuation of the trial and the demonstration of numerous evidence and witnesses indicted, which will prove his innocence of all charges.”

The trial will investigate Becciu’s botched deal to purchase a US$412 million former Harrods warehouse in the ritzy Chelsea neighborhood. Becciu is accused of financing the deal, in part, with Church funds set aside to support papal charities around the world.

The cardinal, who was in charge of handling money for Vatican donations, also is accused of funneling funds to his family members.

The Pope has carried a heavy hand in investigating this case. He ordered arrest warrants and wiretapping.

In April, the Pope decreed that citizen judges—and not cardinals— will try cardinals and bishops in court. Judge Giuseppe Pignatone, who has a history of residing over mafia and financial crime cases in Sicily, will oversee this case, making Becciu the first cardinal to be tried by a non-clergy member.

The Vatican is hoping to show the world that financial crimes will not go unpunished by the Holy See. Pope Francis, who has reigned for eight years, has declared he would work to clean up the church’s finances.

With this case, the Pope makes good on this promise, the new financial chief of the Vatican, Juan Antonio Guerro Alves, asserted to the Holy See’s state news. He called this trial “a turning point that can lead to greater credibility for the Holy See in economic matters.”