Moldovan President Maia Sandu launched this week a new corruption monitoring body, arguing that the current anti-corruption institutions move “much slower than the corrupt groups which are stealing from this country.” 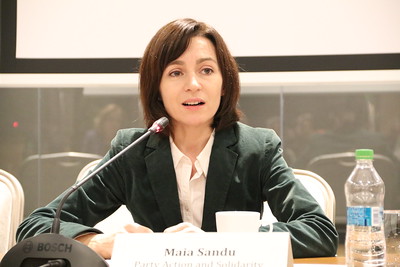 The move came after the European Commission said last week that it will mobilise up to 600 million euros in assistance to Moldova to support anti-corruption reforms. (Photo: OSCE Parliamentary Assembly, Flickr, License)Sandu signed off on the new "Anticorruption Independent Consultative Committee" on Monday and the taskforce began work on Tuesday, according to Moldpres – the country’s state-run news agency.

Alina Radu, a Moldovan journalist who reports on nepotism and corruption in the country, is on the committee, as well Tamara Razin, an economist with the International Monetary Fund (IMF), Drago Kos, an anti-bribery expert, human rights lawyer Nadejda Hriptievschi, and anti-corruption expert Laura Stefan.

"We want to learn why the Moldovan corruption-combating institutions are not efficient in fulfilling their duty," said Wasserstrom, an anti-corruption officer at the U.S. embassy in Afghanistan, according to Euronews.

In a statement at the launch event, the president said that "the good thing is that the citizens of the Republic of Moldova are not alone in the face of this major challenge. Thieves from the Republic of Moldova managed to make themselves known internationally. The frauds they committed have come to be known by the whole world.”

She added that Moldova’s development partners understand the seriousness of corruption in Moldova and that they are ready to help.

The move came after the European Commission said last week that it will mobilise up to 600 million euros (US$731 million) in assistance to Moldova over the next three years to support post-coronavirus economic recovery and anti-corruption reforms.

Moldova ranks 115th out of the 180 countries in Transparency International’s 2020 Corruption Perception Index.