Further cracking down on independent media, President Nicolas Maduro’s government seized the offices of an emblematic Venezuelan newspaper after it allegedly caused moral injuries to a top government official. 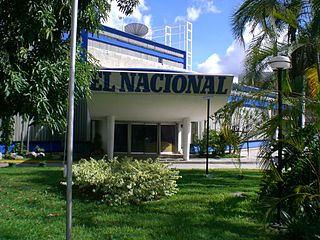 The seizure is believed to be a retaliation against the newspaper for its critical coverage of the Venezuelan government. (Photo: Guillermo Ramos Flamerich, Wikimedia, License)El Nacional, an independent newspaper, saw armed officers seize and empty its headquarters in eastern Caracas on Friday evening.

The move followed an order issued by the country's top court after a longstanding legal battle with Venezuelan politician Diosdado Cabello - a key figure within Maduro's administration and often referred to as the second most powerful person in the country.

In 2015, Cabello filed a lawsuit for moral injury against the paper for reproducing stories originally published by The Wall Street Journal and Spain's ABC. The stories revealed that U.S. prosecutors had probed the politician over his alleged links to drug trafficking.

Last month, Venezuela’s top court ruled the newspaper must pay Cabello the equivalent of more than US$13 million in compensation. The owners of El Nacional refused to pay the amount, which prompted local authorities to seize the building.

El Nacional’slawyers appealed the ruling on Monday, but their move is likely to go unnoticed in a judicial system that reportedly lacks impartiality.

The seizure is believed to be a retaliation against the newspaper for its critical coverage of the Venezuelan government since no other printed publication has faced a similar destiny.

The newspaper’s owner, Miguel Henrique Otero, said Monday the government offered millions to buy the newspaper, which he rejected. He did not specify when the offer was made.

“With honor and with my head held high, today I can tell all Venezuelans that I did not sell El Nacional by rejecting an offer from the regime of millions of dollars,” Otero said in a statement addressing Cabello.

In 2018 El Nacional, the only critical newspaper with a national reach,was forced into adopting a digital-only format due to challenges imposed by the government, including the purchase of paper. At first, it reduced its pages, then it began circulating only Mondays and Saturdays before shutting down its printed edition indefinitely.

The seizure comes at a sensitive time for the country - the Venezuelan government has renewed negotiations with the opposition in an attempt to improve its relationship with Washington and access funds blocked by international sanctions.

Otero criticized the fact that the seizure took place during the negotiations, accusing Cabello of sabotaging the dialogue and planning an ambush.

Attacks against the free press have become increasingly common in Venezuela. Several independent news websites have been blocked by the state internet provider, while the local press union alerted that 41 printed newspapers shut down between 2013 and 2018.