Spanish law enforcement agencies said that in two separate operations they arrested 11 people and seized 12 tons of hashish that came in from Africa by boats. 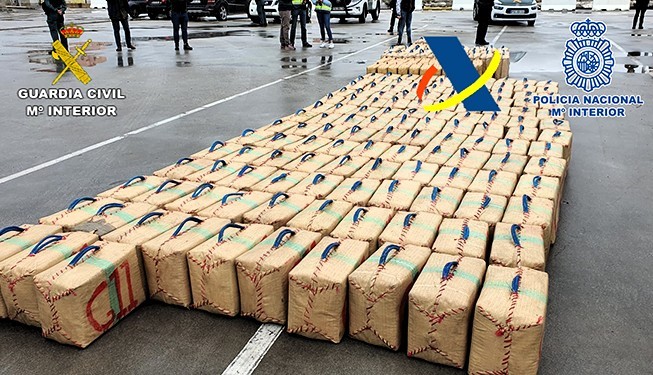 Police claimed that a “high-level criminal organization” had been using a boat to spread large quantities of drugs along the Spanish coast and that the Maritime Analysis and Operations center (MAOC) - an organization initiated by seven EU countries to suppress illicit drug trafficking by sea and air - as well as Maritime Intelligence offices of Galicia and the Canary Islands, have been monitoring the vessel for a year.

The “Felsted” was sailing under the flag of Vanuatu and was intercepted in April after crossing the Strait of Gibraltar coming from the western Moroccan coast. The tug vessel was taken to the port of Algeciras in Spain, “where a deep search was conducted, and 200 bales of hashish were discovered on board,” while three crew members, all Ukrainian nationals, were arrested, according to MAOC.

In another operation, Spanish police seized five tons of hashish, as well as more than €200,000 (US$240,406) in cash, jewelry and a significant quantity of “electronic and computer material of the interest for the investigation,” police said in a statement Monday.

Eight people were arrested, mostly skippers of the so-called “narcolanchas,” or fast boats and fishing boats used for drug smuggling to Spanish ports of Malaga, Cádiz and Almería, from where the drug was allegedly further distributed to several European countries.

The suspects are believed to be members of one of the “leading criminal organizations” involved in smuggling of “large quantities of narcotic substances” to Spain, according to police.

Among the arrested was a Spanish citizen of Moroccan origin believed to be one of the leading “drug traffickers operating between Morocco and the Andalusian coast,” as well as an Italian national, wanted by Italian authorities for his alleged membership in the Neapolitan Camorra mafia group.

However, police did not reveal the identities of the suspects, publishing only initials of the alleged drug traffickers group’s leader -- M.L.M., as well as the initials of the Italian national suspect -- P.V., wanted in his home country for “drug trafficking and mafia-type association.”