Authorities in the Ivory Coast have detained four and rescued 42 in a sting against an alleged human trafficking operation that saw children put to work at several mines and cocoa plantations in the West African country. 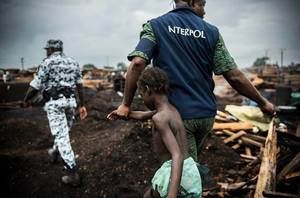 More than 2.3 million children are believed to work on cocoa farms in the Ivory Coast and Ghana (Photo: INTERPOL)Ivory Coast Police told OCCRP on Tuesday that those rescued were nationals of neighbouring Burkina Faso, 19 of whom were aged between 12 and 17.

Police commissioner Luc Zaka said via phone that a special unit intercepted the suspects while transporting the alleged victims from the northern city of Korhogo to Aboisso, a coastal town known for its large cocoa plantations.

Ivory Coast has a grim record on child labour, with the United States Department of Labor warning that the country plays host to some of the most egregious child exploitation enterprises documented around the world.

The country ranks among the world’s top cocoa producers, and many underage victims of trafficking are put to work on the nation’s vast plantations.

NGO Slave Free Chocolate estimates that 2.3 million children work in the cocoa fields of Ghana and the Ivory Coast. It claims on its website that many international confectionary companies — including, but not limited to, Nestle, Hershey and Cadbury — have acknowledged the existence of child labour in West Africa’s cocoa supply chain, but have failed to take effective steps to help remedy the situation.