Every day about two rhinoceroses are killed in South Africa for their horns. 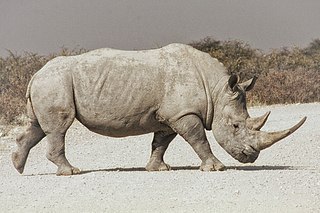 With poaching being socially acceptable and poachers making more money than police protecting the animals, the killings will continue unless law enforcement is adequately funded. (Photo: Rodrigo J De Marco, Wikimedia, License)Be it for traditional medical purposes, or to impress friends with gifts such as carved figurines and necklaces, the demand in East Asia is high for rhino horns and wealthy buyers are willing to pay a good price.

South Africa, on the other hand, is home to two third of Africa’s rhinos while nearly half of the adult population lives in poverty. Between 2010 and 2016, it is estimated that at least 31 tonnes of rhino horn entered the illegal market, according to a new report released by TRAFFIC, a global non-profit dedicated to monitoring the Illegal wildlife trade.

That number could be worth almost US$234 million, based off the price of raw rhino horn on the black market.

TRAFFIC spoke with about 70 incarcerated poachers in 25 of South Africa’s prisons of which 49 used to go after rhino horns while others targeted abalone and cycads. For most of them poaching was a pathway out of poverty.

“The majority of poachers had low education levels, were unemployed or informally employed and came from marginalised communities adjacent to public or private parks or reserves which housed populations of rhino in South Africa or Mozambique,” the report said. Offenders admitted that they volunteered to become involved in rhino poaching after they saw others reaping the economic benefits.

According to another, “In the village where I stay, there are poachers there and they are living a good life. They [have] cars and houses and I wanted that.”

After poaching and harvesting, the horns are filtered through a string of intermediaries, including processors, transporters, and packagers, at each stage becoming more valuable, before ultimately arriving in markets, largely in East Asia.

“The illegal trade in wildlife and wildlife products globally is estimated to be worth more than $72 billion annually, ranking alongside the illegal trafficking of narcotics, arms, and humans,” TRAFFIC said.