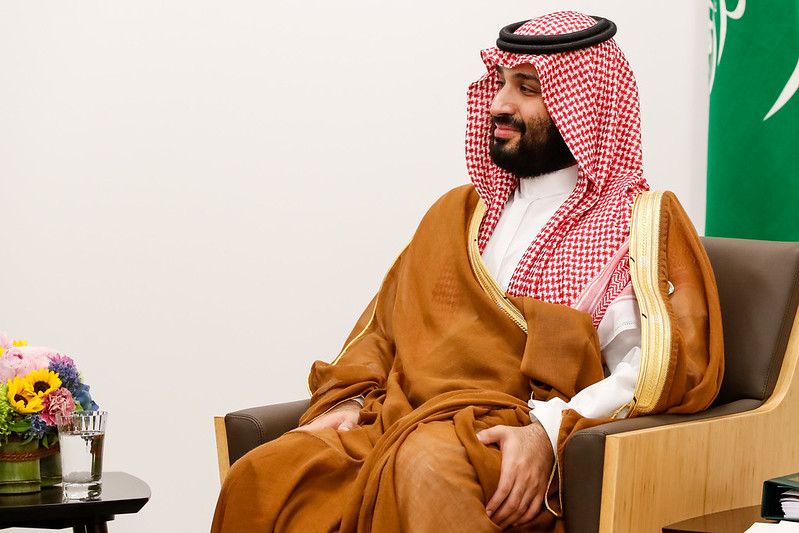 Crown Prince of Saudi Arabia Mohammed bin Salman. (Photo: Alan Santos/Palácio do Planalto, Flickr, License)“Crown Prince Mohammad bin Salman is keen to demonstrate his personal interest in fighting corruption at the highest levels and the Riyadh Initiative is the latest manifestation,” a Saudi journalist told OCCRP on Monday on condition of anonymity.

The Riyadh Initiative was welcomed by the G20 summit hosted by Saudi Arabia virtually on November 21-22. It is meant to create a Global Operational Network of Anti-Corruption Law Enforcement Authorities. Saudi Arabia has pledged $10 million to support the drive.

Just days after, Saudi authorities announced they had arrested 226 people, including a retired major general, as part of 158 investigations into corruption within the country’s Ministry of Defence and other government agencies.

The kingdom’s Oversight and Anti-Corruption Authority (Nazaha) said on Thursday that most investigations found the suspects were involved in forgery, squandering of public funds and exploiting the influence of the public office.” Authorities believe the detainees took hundreds of thousands of dollars in bribes.

Formal procedures are underway to return the money taken by officials working for the health, defence and finance ministries, other civil servants and a number of Saudi and foreign businessmen.

The agency did not reveal any names but highlighted six of the most prominent cases. One involved 48 people, including 18 Ministry of Defence employees, who allegedly took $327 million in bribes.

Another involved the director of quality management at a local municipality and his two brothers who allegedly helped one contractor win a number of projects worth $453 million.

In a third case, a retired major general allegedly received a $2.18 million bribe in “cheques and cash” from three employees of a company that won a contract with the Ministry of National Guard.

“The Authority affirms its pursuit of anyone who exploits the public office to achieve personal gain or harm the public interest in any way possible,” according to the Nazaha statement.

“Accountability extends far beyond the retirement of any individual, as the crimes of financial and administrative corruption have no statute of limitations,” it said, adding that it will “apply what the law rules against violators with zero tolerance”.

One of the Riyadh-based journalist, who spoke to OCCRP on condition of anonymity, said the Crown Prince, who also is Defence Minister, and his brother, Prince Khalid Bin Salaman, the Deputy Defence Minister since February 2019, were keen on purging the government entity from graft by civil servants as well as military officers, current and former.

“They both know the ins and outs of the ministry and are bent on weeding out corruption. In the process many Saudis and foreigners from the private sector and military men have been arrested in the latest cases,” he said.

Oil-rich Saudi Arabia detained in 2017 more than 200 princes, ministers and businessmen for corruption and held them at luxury hotels such as the Ritz Carlton.

Over $100 billion had been recovered under financial settlement agreements signed with the detainees, the Saudi prosecutor general’s office said then.

The detentions three years ago followed the creation of the anti-graft body headed by Crown Prince Mohammad bin Salman, the de facto ruler of the country.

“This is a Mini Ritz anti-corruption operation” said another journalist. “The operation is also targeting those military officers the two Bin Salman brothers do not trust or deem loyal inside the Defense Ministry“ as they consolidate their power, he said.

Saudi Arabia’s 2030 vision, launched by Prince Mohammad, aims among other things at eradicating corruption which in many cases is a cross-border crime and to fight it requires global cooperation and coordination between the anti-corruption authorities in line with the United Nations Convention against Corruption (UNCAC).