The U.S. has dropped drug trafficking and money laundering charges against retired General Salvador Cienfuegos Zepeda who served as Mexico’s defense secretary between 2012 and 2018 and was arrested in Los Angeles last month, according to a statement from the Department of Justice. 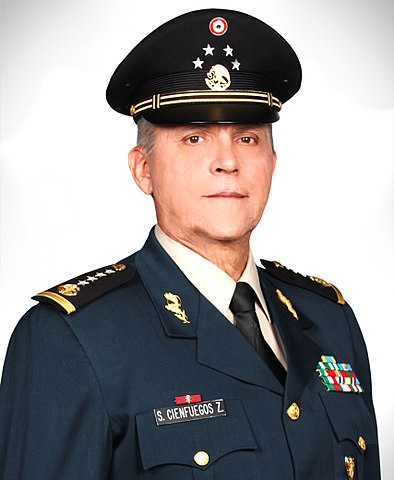 Although some question whether Cienfuegos will truly see justice in Mexico, the decision has been hailed as a win for Mexican sovereignty. (Photo: PresidenciaMX 2012-2018, Wikimedia, License)Cienfuegos had been indicted in 2019 for allegedly having conspired with Mexico’s H-2 cartel during his term as defense secretary. He was suspected of having warned cartel members of impending raids and having directed his troops against rival cartels in exchange for bribes. He was allegedly known to the cartel under the alias “Il Padrino” -- the Godfather.

However, under an agreement with Mexico, Cienfuegos will be returned to his home country to face an investigation there.

“In recognition of the strong law enforcement partnership between Mexico and the United States, and in the interests of demonstrating our united front against all forms of criminality, the U.S. Department of Justice has made the decision to seek dismissal of the U.S. criminal charges against former Secretary Cienfuegos, so that he may be investigated and, if appropriate, charged, under Mexican law.” said a joint statement from U.S. attorney general William Barr and his Mexican counterpart, Alejandro Gertz Manero, on Tuesday.

Although some question whether Cienfuegos will truly see justice in Mexico, the decision has been hailed as a win for Mexican sovereignty by Mexican officials.

“We don’t see it as a path to impunity but rather as an act of respect toward Mexico and Mexico’s armed forces,” Mexican Foreign Affairs Secretary Marcelo Ebrard said at a news conference according to Time.

However, others feel the decision was more politically motivated and may be a gift from U.S. president Donald Trump to Mexican President Andrés Manuel López Obrador, for his reticence to acknowledge President-elect Joe Biden’s election victory.

“No matter how you slice the pie, this is nothing more than a last ditch favor to López Obrador,”   Mike Vigil, the Drug Enforcement Administration’s former chief of international operations, told Time. “López Obrador has been very subservient to Donald Trump on immigration issues and has hesitated in congratulating Joe Biden.”

In court filings, acting U.S. Attorney Seth Duchampe wrote that the evidence against Cienfuegos was strong but that a dismissal of the case would be in the public interest of the United States.

“The United States has determined that sensitive and important foreign policy considerations outweigh the government’s interest in pursuing the prosecution of the defendant,” he wrote.