The regional administration of Indian-administered Kashmir has shut down the office of Kashmir Times, a leading local English-language newspaper. Authorities gave no reason for the actiont, but the publisher believes it was retaliation for the daily’s critical reporting. 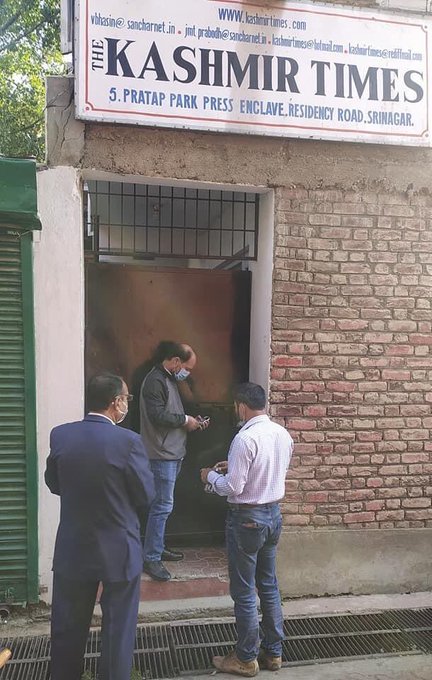 She said that the action was conducted in the same way as her own eviction from a flat in Jammu earlier this month, where her belongings, including valuables, were “handed over to new allottees.”

“I cannot say what exactly triggered the government to [do] this,” Bhasin told OCCRP Wednesday. She said she believes the Indian authorities executed a “vendetta for speaking out.”

“Last year, I went to court against the communication blockade,” she said. “From that very day, government advertisements to Kashmir Times were stopped.”

The newspaper, according to Bhasin, “has been consistently critical of the government for the last 14 months and has been writing critically about their policy and actions.”

Bhasin told OCCRP, “We have been trying to bring in as many voices as possible to show the ground reality despite the financial distress which has had a huge impact on Kashmir Times’ operation.”

She noted that the media in Kashmir have been going through difficult times, “with lots of obstacles and the government, which has been trying to impose complete silence or complete censorship on the media.”

“We condemn the ongoing targeting and harassment of Anuradha Bhasin and Kashmir Times. Authorities must stop trying to silence independent and critical voices and should respect press freedom,” said the Committee to Protect Journalists (CPJ).

Kashmir Times, one of the oldest newspapers of the Kashmir valley, had been located in the government building in Srinagar. The government says the premises were allotted to it in the early 1990s.

The valley is under tight restrictions since Prime Minister Narendra Modi revoked the special status of the Muslim majority state in August 2019. The Indian government instructed journalists to seek prior permission to visit and report in the protected areas, including Kashmir.

Both local and international journalists have complained about state suppression and a dangerous reporting environment inside the conflict-torn region claimed by both India and Pakistan.

Kashmir Times is not the first media to be targeted by the authorities this year, as India’s authorities have charged many Kashmiri journalists under the strict laws, particularly targeting “anti-national” social media posts. The government stance has been condemned by global press freedom groups.

Bhasin said that media in Kashmir has faced various forms of censorship, intimidation and threats, particularly in the last 30 years of armed conflict.

At times, she noted, reporters were threatened by both sides. Many journalists have been killed, jailed or kidnapped.

India has been ranked 142 out of 180 countries rated on the World Press Freedom Index this year over the communications blackout in the part of Kashmir it administers.