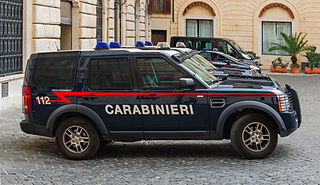 The ‘Ndrangheta’s illicit activities are estimated to account for a full 3% of the Italian GDP. (Source: Wikimedia Commons) About 550 French and Italian officers arrested 46 individuals - 33 in France and 13 in Italy - for their involvement in large-scale drug trafficking and money laundering, Europol said.

“During the house searches, law enforcement officers seized weapons, a large amount of cash, counterfeited documents, drugs, vehicles and various assets from money laundering operations. The investigation also uncovered the transfer of weapons, some of them military,” the statement said.

The arrested are suspected of being members of two ‘Ndrangheta clans, the Gallico, based in the Italian city of Palmi, and the Magnoli clan in the French Riviera.

“The suspects linked to the ‘Ndrangheta were reported to play an active role in cocaine and cannabis trafficking between the Côte d’Azur in France and Liguria in Italy, with supply chains from Belgium, Spain and the Netherlands,” said Europol.

“During the joint raid, more than 160 police officers, including members of the Belgium Special Weapons and Tactics team, helicopters and police dogs were deployed” said a separate Europol statement.

“This operation puts an end to an infamous and deadly mafia feud that had been going on among alleged members of the Cosa Nostra in Belgium (Liège and Maasmechelen) and Italy (Favara in Sicily) between 2015 and 2018,” said Europol. “The violence that arose from this clan war was most likely related to cocaine trafficking disputes.”

In recent years, the ‘Ndrangheta has overtaken the Sicilian Cosa Nostra as Italy’s most prominent mafia group. The ‘Ndrangheta’s illicit activities, which include everything from the trafficking of narcotics, arms and humans to extortion and money laundering are estimated to account for a full 3% of the Italian GDP.