Lebanese Wonder if Beirut Explosion was Caused by Negligence or Graft

As authorities are counting the dead and hospitals are struggling to treat survivors of the massive blast that ripped through Beirut on Tuesday, a mourning population is wondering who is to blame for the disaster in their country that has been engulfed by ruling class corruption and negligence for decades. 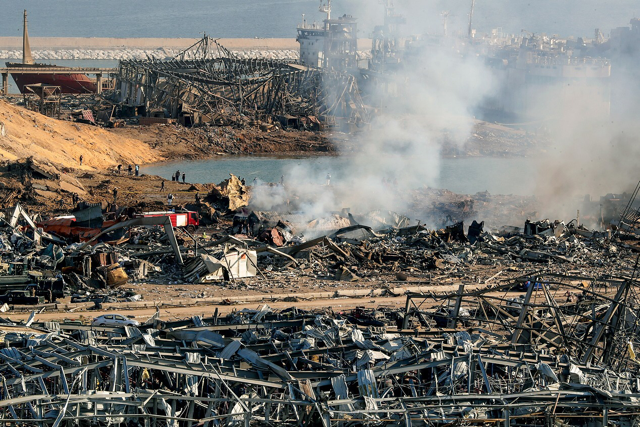 Beirut port after explosion (by Daraj.com)The explosion on Tuesday evening at a Beirut port warehouse killed at least 135 people, injured 5,000 and left over 200,000 homeless. The blast sent a mushroom-shaped cloud into the sky, rattling windows and ripping off facades in a city still scared by the 1975-1990 civil war, the ongoing economic meltdown and a new surge in coronavirus infections.

Mayor Jamal Itani estimated the damage to be over US$5 billion and said the city looked like a war zone. He was seen crying on TV after inspecting the mass devastation.

A surgeon at the emergency department of the American University of Beirut Medical Center told OCCRP his teams treated over 400 victims who mostly suffered from burns and glass shrapnel injuries.

“We have not seen such a thing even at the worst attacks suffered during the Lebanese civil war when I started my career,” he said.

The distressed public is now asking who owns the 2,750 tons of ammonium nitrate and who allowed it to be stored for six years in a warehouse in the middle of the densely populated capital without proper safety measures.

Prime Minister Hassan Diab has ordered an investigation and a government statement said that authorities have put “those in charge of storage and security at the port since 2014 under house arrest until the investigation is concluded.”

Julien Courson, Executive Director of the Lebanese Transparency Association, told OCCRP that authorities have issued conflicting statements and called for a proper probe that would reveal whether negligence or corruption were to blame for the carnage.

“Surely there are suspicions, and what could help is an open and transparent investigation, supported by independent technical experts who would be able to understand what happened,” he said.

The ammonium nitrate reportedly arrived at the Beirut port in late 2013 when a Moldova-flagged ship, the m/v Rhosus, ran into technical trouble while sailing from Georgia to Mozambique with 2,750 tons of the chemical on board.

Lebanese authorities did not allow the dangerous cargo to leave on a defective ship which was allegedly abandoned by its owner. The crew was eventually repatriated and the ammonium nitrate was moved to a port warehouse awaiting auctioning or proper disposal.

According to Moldova’s Naval Agency, the Rhosus was owned by the Panama-based company Briarwood Corporation, and chartered by a Marshall Islands company, Teto Shipping Limited.

Both are registered in secrecy jurisdictions that hide companies’ true owners, but media reports and one Greek maritime services company that had previously dealt with Teto Shipping identified the manager of the Marshall Islands company as Igor Grechushkin, who is reportedly a Russian resident of Cyprus. Grechushkin hung up when an OCCRP reporter called him on the phone.

The Cyprus Shipping Council told OCCRP they never heard of Grechkushin or his company.

Back in Beirut, local websites are circulating two documents indicating that Lebanese Customs had asked the court every year from 2014 to 2017 to order the “concerned maritime agency” - which could be the port warehouse - to re-export the stored cargo or allow its sale to a local private company, Lebanese Explosives Co. SARL (Majid Shammas & Co).

None of the involved authorities that now keep blaming each other had made any move to eliminate the dangerous chemical from the port or secure it properly.

Most Lebanese have lost confidence in the government and the judicial system a long time ago.

The country is the 137th least corrupt nation out of 180 countries, according to the 2019 Corruption Perceptions Index reported by Transparency International, and many do not believe that justice will ever be served by an earthly court.

“God, please punish all those who are behind this disaster,” Karimah Jacque, a mother of three who lives near the port, appealed as she spoke to OCCRP.

Eli Moskowitz and Aubrey Belford contributed to this report