A new project that will be led by Europol and financed by the European Commission will help the EU’s eastern neighbours -- Armenia, Azerbaijan, Belarus, Georgia, Moldova and Ukraine -- fight organized crime. 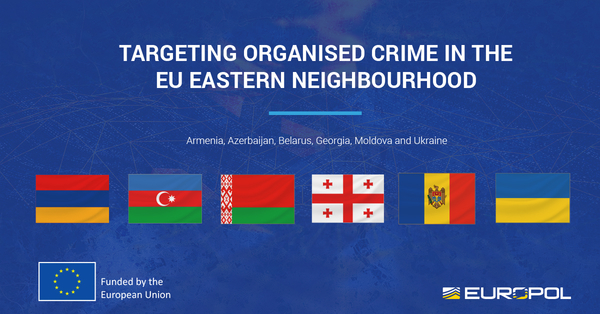 Europol, EC to help EU's eastern neighbors in fighting organized crime. (Photo: Europol)“Located along the Black Sea and forming part of the ‘heroin route’ from the Middle East to Europe, all six Eastern Partnership countries are threatened by organized criminal groups active in the area,” read the Europol statement.

Besides heroin smuggling, those groups have also been involved in “migrant smuggling, organized property crime, human trafficking, firearms and drug trafficking, money laundering, and other related crimes such as document fraud,” the agency stated.

The project should help strengthen the capacities of those countries to “fight organized crime more effectively,” and should help “reduce crime and create a safer living space for citizens in the region.”

Europol stated that the project is part of a larger 10 million euro (US$11.4 million) EU cooperation.

“The EU has dedicated 2.5 million euro ($2.85 million) to support the project that will run for the next four years,” read the statement. It added that two other components have been focused on law enforcement training, threat assessment and on criminal asset recovery in the six countries.

The project is also expected to extend the existing networks for information sharing and operational cooperation into joint investigations to “improve the effectiveness in fighting transnational organized crime.”

“Our aligned efforts will bring a stronger response to the common challenges and cross-border threats we face,” Executive Director of Europol, Catherine De Bolle, said.

Joint efforts, she added, are “crucial to connect the dots between criminal networks in the EU and the neighbourhood region.”