“I was infected with Coronavirus,” the listing on darknet site Own Shop read. “I sell my infected blood and saliva. I do this to provide for my family financially.” 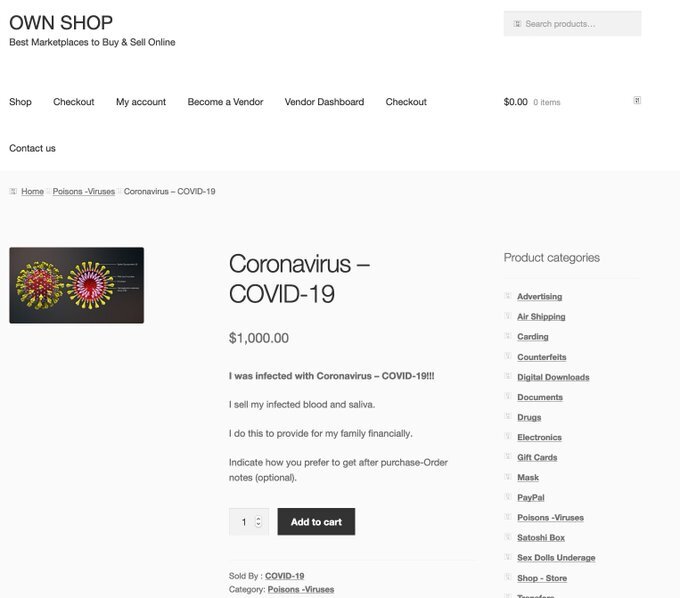 The vendor on darknet site Own Shop claimed to be selling samples of blood and saliva infected with COVID-19 (Photo: Eileen Ormsby)While multiple media outlets have recently reported a surge in dark web listings for corona-related items, including contaminated bodily fluids, one expert says these are likely nothing more than a scam.

Eileen Ormsby, a darknet expert and author of The Darkest Web, told OCCRP on Tuesday that listings claiming to sell fluids contaminated with the novel coronavirus, or blood taken from those who have recovered from the disease, have probably been posted by fraudsters looking to profit from the crisis.

The vendor behind the listing on the darknet site Own Shop claimed to be selling units of supposedly infected bodily fluids for around US$1,000.

Another post on the marketplace Agartha offers plasma taken from the blood of patients who have successfully fought off the disease. 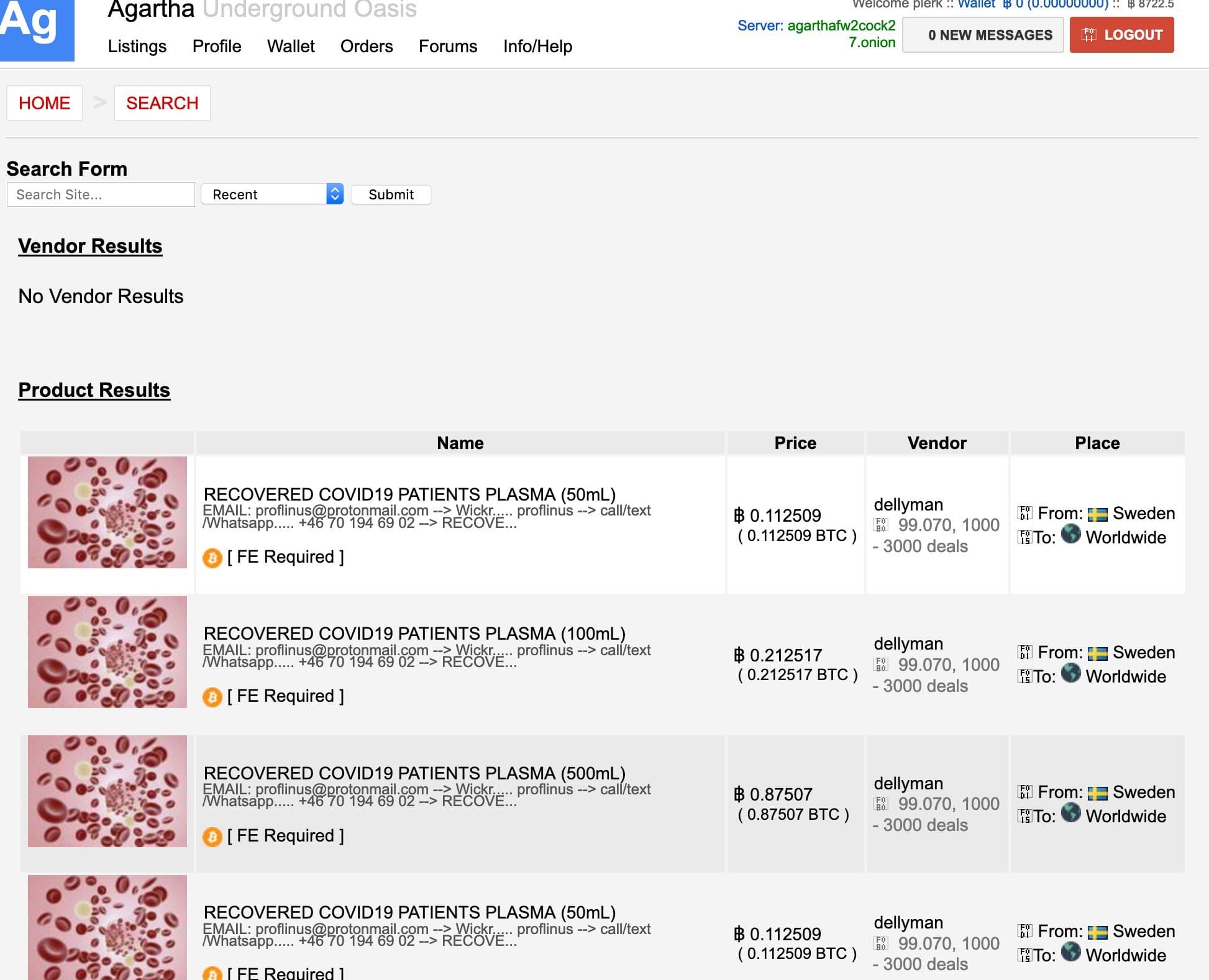 Last Thursday, the Australian Institute of Criminology released a report claiming to have found in just one day more than 645 corona-related listings on around 20 darknet sites.

Lead researcher on the report, Rod Broadhurst, told AM News that the assumption behind the sale of blood from people who have recovered from corona is that buyers inject themselves with the plasma as a means of inoculating themselves against the disease.

“The word I think is passive vaccination, where the blood plasma of a recovered COVID-19 patient is harvested for the antibodies and that is then used to inject into someone who may be at risk of COVID-19,” he told the Australian news outlet.

It still remains unclear why buyers might want to purchase a sample of blood from someone who is actively infected with the disease. But Ormsby says that it is highly unlikely these sellers have any access to medical samples at all, much less that they would actually post them in return for payment.

“Right at the beginning of the pandemic there were a lot of PPE (personal protective equipment) listings - some of these may be genuine, probably people with access to cheap goods and selling them in bulk,” Ormsby said.

“But the blood listings, my impression is that these are absolutely a scam. This kind of thing comes up a lot, people will just jump on any trend and post listings they think will lure people in,” she added. 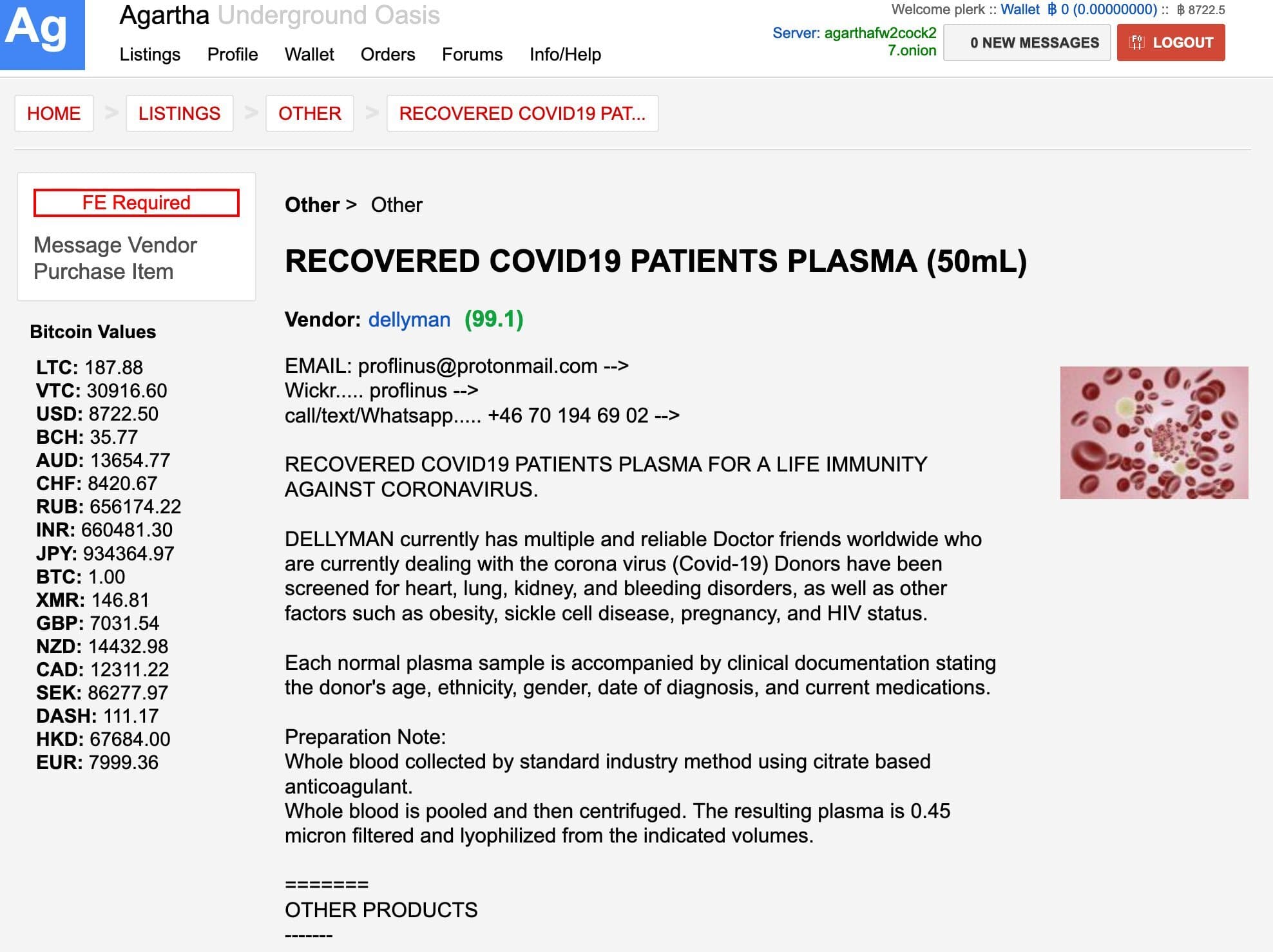 An expanded view of one of the listings on Agartha (Photo: Eileen Ormsby)In fact, Ormsby says that the most noticeable trend since the outbreak of the virus is actually how darknet activity appears to be slowing down, due to the impact of the global lockdown on drug supply and delivery.

“Generally, people tend to use these marketplaces simply to buy illegal drugs, and the coronavirus is limiting how effectively these sales can be made,” she said.

That isn’t to say that weirder listings don’t pop up every now and again. Ormsby says that sham hitman ads are common, and in one instance she came across a vendor claiming to sell genuine shrunken heads, “with a pretty good story behind how they supposedly got hold of them."

To date, no vaccine or cure for the novel coronavirus has been discovered, and medical experts  around the world are advising people to disregard any sellers online who claim to have found a remedy for the disease.

In the US, President Donald Trump has drawn widespread derision for his public speculation as to possible cures, which critics warn are driving people to experiment with as yet untested treatments for the virus, often with fatal results.

In late March, multiple media outlets reported that an Arizona man had died and his wife had been hospitalised after they had ingested doses of a home-aquarium additive. It followed after Trump had touted chloroquine, an antimalarial closely related to one of the ingredients in the fish-tank cleaner, as a possible vaccine against the disease.

Concerns were further raised after a press conference at the end of April, at which the US president suggested that the internal administration of disinfectant might be used to combat COVID-19 once it has entered the body.

Medical experts swiftly responded by pointing out that drinking bleach is actually a common and exceptionally painful method of suicide, according to the BBC.